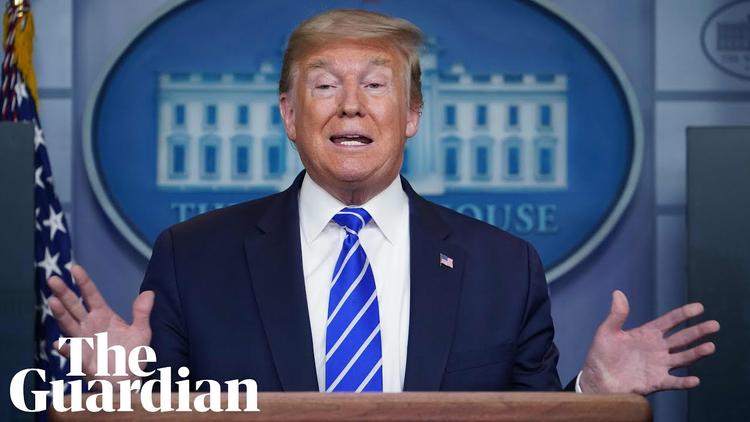 Jeff Zucker, the CEO of the Cable News Network, has a Harvard B.A. in American History and his father is a cardiologist, so he definitely knows better. So too does Steve Burke, the CEO of Comcast / NBC Universal. Suzanne Scott at Fox Fable News probably doesn't know better, but that is no excuse.

The cable news media continues to broadcast Daffy Donald's Parlous Snake Oil Show every night unfiltered and to let him say the most damaging things. When CNN pulled back briefly, Trump denied them high visibility guests like Dr. Anthony Fauci until they folded. But Fauci has lots of peers in the US medical community; put them on instead. The cable networks pimp Trump out for ratings, since advertising rates are tied to ratings. Like alien ravagers in a sci-fi B movie, they are willing to leave the country a burned-out post-apocalyptic hulk for the sake of their corporate profits. They've even pretty much stopped reporting any actual news at all, since that wouldn't support the selling of tampons and toilet paper.

First the Daffy One pushed hydrochloroquine, which is implicated in heart problems, for coronavirus in the absence of a big clinical study. Whether he was talking up the stock of Novartis, the manufacturer, and how much of that stock he or his cronies own, is something that perhaps only future historians will know, given how successful Trump has been in covering up his various crimes. But that advocacy was merely dangerous and reckless because premature and unfounded, but it wasn't out of the realm of possibility.

But then on Thursday, Daffy Donald floated off into the vast Empyrean of infinite daffiness:

"So, supposing we hit the body with a tremendous whether it's ultraviolet or just very powerful light and I think you said that hasn't been checked but you're going to test it. And then I said, supposing you brought the light inside of the body, which you can do either through the skin or in some other way. And I think you said you're going to test that too. Sounds interesting."

"Then I see the disinfectant, where it knocks it out in a minute, one minute, and is there a way we can do something like that, by injection inside, or almost a cleaning, because you see it [the coronavirus] gets in the lungs and does a tremendous number on the lungs, so it would be interesting to check that, so that you're going to have to use medical doctors, right? But it sounds, it sounds interesting to me."

[I originally embedded this clip from The Guardian but they thought it so toxic they took it down. It was just a clip. We are to the point where responsible journalists have second thoughts about broadcasting the president without contextualizing, as this Bloomberg short does.]

I've spent my scholarly life analyzing texts, and I think these weighty passages need parsing. Daffy Donald, it seems, wishes to cure the coronavirus by shining light on the body. He appears to think that simple white light might have a curative effect. But he is willing to entertain the possibility that stronger medicine, in the form of ultraviolet rays, might be necessary.

Shining the light onto the outside of the body, however, he believes, might be inadequate since that is usually known in layman's terms as "sunbathing." No, a measure more effective than Florida Gov. Ron DeSantis's West Palm Beach Cure might just be desirable. Especially since DeSantis, a notorious white supremacist, has mixed feelings about turning white people brown, but also because he mainly is spreading the elder-killing coronavirus around a state with old folks' homes stacked every which way from Sunday.

So Trump admits that it might (we have to look into this) be possible or desirable or both to bring the light inside the body.

As Professor Trump knows, when photons encounter a dense array of atoms with strong electron fields around them (such as a human body) they interact with the electrons, which absorb their energy. In other words they can't get through ordinary matter, such as a human body. Photons can in some sense get through glass, because they don't much excite the electrons of those atoms, which have big band gaps. But UV rays can't get through most window panes, and they also can't get much past a person's outer skin.

Related Topic(s): Photons; Trump; Trump Ego; Viruses, Add Tags
Add to My Group(s)
Go To Commenting
The views expressed herein are the sole responsibility of the author and do not necessarily reflect those of this website or its editors.