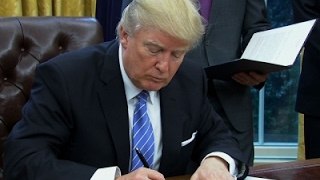 Today President Trump formally withdrew the US from the TPP, Trans-Pacific Partnership.

After Trump scrapped the TPP this is how the New York Times described it, "The president's withdrawal from the Asian-Pacific trade pact amounted to a drastic reversal of decades of economic policy in which presidents of both parties have lowered trade barriers and expanded ties around the world." [1]

Obviously to the Times what Trump has done is a colossal blunder, "a drastic reversal of decades of economic policy." Please.

Let's remember the TPP had been condemned by progressives and Democrats since it became widely known when Wikileaks released the text of the secret deal in October, 2015.

Put simply it was a bad trade deal giving corporations the right to sue foreign governments and take them to court if the countries domestic regulations hurt the corporations profits. The neo-liberal deal would increase profits for the corporations and their investors at the expense and exploitation of the workers. It meant a country was sacrificing its sovereignty to the corporate interests doing business in that country. Is it any wonder it was formulated in secret?

We now know where the leading corporate MSM newspaper stands on Trump torpedoing the TPP.

How about the Democrats that were against the TPP? They've had Trump in their crosshairs since the "Donald" defeated Hillary in November. Will they now join the Times in condemning Trump over TPP or will they drop their venom towards him on this one occasion and applaud him for it?

Remember it was Hillary Clinton who was forced to drop her support for the TPP by the Democrats in her own party as they knew the deal was a bummer and would hurt her in the general election.

So again, with Trump formally canceling US participation in TPP will Democrats now support the move or condemn him for it, because...well it was Trump who did it?

If they condemn him it will confirm Democrats have lost all perspective in their knee jerk reaction condemning Trump for anything. And if that's the case it would seem if Trump inhaled a breath of air Democrats would find something wrong with the way he did it.

But if Trump does something right, which formally abandoning TPP is, let's welcome the decision.

Of course that doesn't mean if he does something outrageous we shouldn't hold him to account.

Let's keep things in proper perspective. Each decision, policy change, action Trump takes should be scrutinized on its merits or the negativity it presents. Case by case.

Retired. The author of "DECEIT AND EXCESS IN AMERICA, HOW THE MONEYED INTERESTS HAVE STOLEN AMERICA AND HOW WE CAN GET IT BACK", Authorhouse, 2009
Related Topic(s): Tpp Trans-pacific Partnership; Trump Presidency; Withdrawal, Add Tags
Add to My Group(s)
Go To Commenting
The views expressed herein are the sole responsibility of the author and do not necessarily reflect those of this website or its editors.