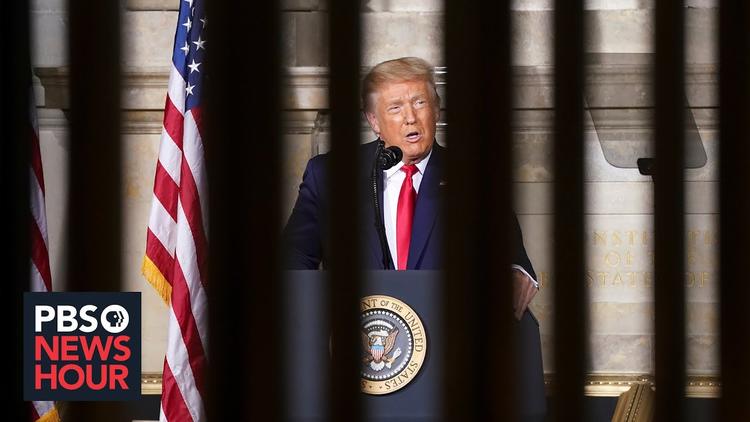 Trump has a long history of proclaiming that he understands things better than the people who are experts in those things. When Dr. Robert Redfield, the head of the Centers for Disease Control, testified to Congress that mask-wearing is even more effective against COVID-19 than a vaccine is likely to be. The next day Trump contradicted him.

Redfield is an eminent virologist with a doctorate of medicine from Georgetown University School of Medicine. Trump cheated on his SAT's, paying someone to take them for him.

Masks are estimated to reduce transmission by 80%. Vaccines may be only 60% to 70% effective. I think we may conclude that Dr. Redfield has the better of this argument.

Having crashed the US economy and having polished off tens of thousands of Americans with his irrational policies based on magical thinking, Trump is now coming for American history.

Trump wants history to be taught as a celebration of the United States and its achievements, and wants it taught in such a way as to erase the achievements of popular movements, including unions and civil rights organizations. He singled out for condemnation Howard Zinn's A People's History of the United States. Given that well over half of Americans can't stand the sight of Donald Trump, his condemnation of Zinn's work will certainly shoot it into the ranks of best-sellerdom. Couldn't someone please tell Trump how pernicious my own books are and have him publicly denounce them? I'm sure he hates Napoleon's Egypt, for instance, or The New Arabs, or Muhammad: Prophet of Peace amid the Clash of Empires.

Professional historians are not interested in history as a celebration of anything. They are perfectly happy to praise a remarkable achievement where there has been one, mind you. But academic history is not about praise or blame or making people feel good about their national identity. Historians construct narratives of the past, and if people want to feel good about those narratives, there is nothing wrong with that. But it isn't what the historians are going for.

What excites historians is explanation. Why did something happen when it did? Thousands of books have been written about the French Revolution, trying to explain why it unfolded as it did. Once you get hooked on a question like that, and if you are dissatisfied with the prevailing theories, you can't rest until you get to the bottom of it. Historians are the kind of people who can't understand how anyone could get bored, or want to commit suicide. The archives are there, the documents are available, but so many historical puzzles haven't begun to be solved, and trying to solve them is fun and can give meaning to life. There are only about 12,000 members of the American Historical Association, mostly college professors. A decade ago there were 57,200 high school history teachers. We have 330 million Americans, so I conclude that not very many Americans pursue history as a profession. I personally think we'd all be much better off if there were more.

We can illustrate these principles briefly with reference to Thomas Jefferson and slavery. Jefferson's slave-owning had a context in the history of European slavery and in the trans-Atlantic trade in African slaves. His own ambivalence about the institution derived from Enlightenment ideals about human equality. He admitted that he ought to have freed his slaves. So why did he decline to manumit his slaves? Well, his Virginia estates were terrible farmland, and he tried to grow tobacco on them, which depletes the soil. They were so bad that he could barely stay in business. He instead set up a manufactury for nails on his land, which he admitted only prospered because of the labor of his Black slave boys, who were beaten by the overseer.

He was convinced that if he let his slaves go, he would go bankrupt. This is no excuse. He was untrue to his own ideals. So what if he couldn't be a British-style gentleman? But in order to understand his moral failure, we have to understand his economic and social context. Contingency comes in here. What if Jefferson had been more entrepreneurial, and more principled, like ex-slave owner Ben Franklin? Or more principled, like George Washington, who did free his slaves? To be fair, only relatively late in life did Franklin take an anti-slavery stand. Or what if Jefferson had been rich and felt he could afford to pay farm hands instead of exploiting the labor of people he tried to own like property? Complexity means not analyzing Jefferson only with regard to his contributions to religious freedom or to the Declaration of Independence or indirectly (he was in France) to the Constitution. It means seeing him as a part of the "gentleman" class. One of his grievances against the British is that they did not view colonists like himself as equal gentlemen to those in Britain. Remaining a landed gentleman was so important to him that he betrayed his belief, expressed in the 1780s, that slaves should be freed. It means seeing him as a slave-owner who raped his slave Sally Hemings. I say raped because a slave cannot refuse sexual advances and the power dynamics of master-slave sex are always predatory. Note that Sally was the half-sister of Jefferson's wife, Martha. Complexity also implies a willingness to bring in a wide array of evidence. In this case, DNA studies prove that Jefferson had children with his slave, Sally Hemings.

And all of these tools allow us to pivot away from Jefferson. What if we instead wrote the biography of Sally Hemings, and told the history through her eyes and that of her six children by Jefferson? What if we traced her ancestry back to, say, Senegalese Muslims? I'm not saying we can, though DNA studies could help with the Senegal part. Would that make American history look different?

Actually, I would add to change over time, causality, context, complexity, and contingency, comparison and contrast as a key tool for historians. Comparing Jefferson, above, to Washington and Franklin and Sally Hemings seems to me to add something to the story. My friend Raymond Grew, who promoted comparative history, just died, so I'm making this point in his memory.

Historians apply these ways of thinking to what they call primary sources. If you are studying a person who lived in the 19th century, and you can find that person's diary, you've hit the jackpot. The diary is a primary source. But it might not be the only one. Say the person was involved in a riot and wrote about it in the diary. But then you find a police report and the incident, and the person being studied, look completely different from the account in the diary. Then you have to weigh the two primary sources against one another. Maybe the policeman was lazy or prejudiced. Or maybe the writer of the diary did something shameful and covered it up when writing about it. Part of what historians do is weight primary sources against one another. But if you have an account of that person written in 1920 long after she or he was dead, by someone who did not know the person, that would be a secondary source. It can be important, but cannot in itself solve most questions.

History-writing doesn't stand still. In that regard, it is a little like science. If you want to know about the moon Titan that orbits around Saturn, you wouldn't want to read a book about it written in 1942. You'd want to know the latest findings. But history isn't exactly like science. There may be some insights in a book written in 1942 about the history of San Francisco that aren't preserved in the most recent good book on the subject. Still, historians believe that as time has gone on, they have made advances in historical understanding.

Related Topic(s): History; History And The Present; History Cultural; Slavery; Trump Campaign Speech; Trump Liar; Trump Racism, Add Tags
Add to My Group(s)
Go To Commenting
The views expressed herein are the sole responsibility of the author and do not necessarily reflect those of this website or its editors.