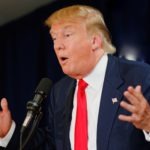 Sitting and watching the March blizzard do its thing outside the window -- working, working, working to shut everything down -- a memory from the 2016 presidential campaign snuck into my consciousness. The post kept popping up on my Facebook feed, but I honestly can't remember the original source of the news. I'm also not in the mood to go researching for it because I didn't think it was fake news then and today I am convinced it is the god's honest truth.

In brief, one of DT's former aides (of which there are many) wrote an article in which she claimed he never expected to win the Republican nomination and the election. Indeed, she said he did not wan t to win the election. Rather, she said, he just wanted to get his name out there for whatever profit he could gain from the publicity and maybe help launch a TV network he was planning. Branding.

Less than two months since his inauguration, it's obvious: Donald Trump likes being president, but he is less than fond of doing president. The title and the glory are great -- right up his alley. Put a big, gold "T" on the White House.

But the work? Daily intelligence briefings? Reading reports on the battle against ISIS? Getting up to speed on how complicated health care is? Learning the difference between the debt and the deficit, Medicaid and Medicare, China and Taiwan, Iran and Iraq, legal and unconstitutional? Isn't that what we have Mike Pence for?

The man has no patience for details, for facts, for differing opinions, for the legal process, for diplomacy, for Cabinet meetings, for, at the very least, hiring people to fill the hundreds of federal government jobs unfilled since he took office. Who knew being president was such a big job?

Well, for one, his predecessor. And, with varying degrees of success, a long line of predecessors before Barack Obama.

Getting back to that aide's story " Was there ever a campaign for president run with such obvious disregard for facts? WIth such disdain and outright rudeness aimed at other candidates? With such arrogant disregard for the bigotry and violence it encouraged in its followers? With such crudeness towards women, minorities, the physically handicapped? With such an ill-informed, self-obsessed liar as the candidate?

It was a campaign expressly designed for maximum press coverage, which it got. What went wrong for Trump is that he was up against the worst field of Republican candidates imaginable, few of whom had the guts to match him insult for insult (some of whom now kiss up to him since he's the titular head of their party) and then ran into the most disliked Democrat in America as his opponent in the general campaign. Even encouraging the Russians to wiretap Hillary Clinton wasn't enough to doom the Trump campaign.

Hard as he tried, most Republican leaders and elected officials couldn't bring themselves to publicly call him a bully and a liar and a fraud and so their voters -- the ones who weren't outright racists or conspiracy theorists or rightwing extremists, all of whom loved him from the get-go -- went for the celebrity candidate who promised them ... well, whatever they wanted him to promise them.

Trump's bad luck followed him into November. Clinton beat him by three million votes and still lost, thanks to the Electoral College, which is a concept the new president surely still does not understand. Although he swears he had the widest winning margin there in decades. He couldn't lose for winning, no matter how hard he tried. And now he has to try to convince a bunch of much smarter people who report to him every day that he knows what he's doing.

Not that they believe him.

Which is our problem, America.

The golf? Jeez, I know I promised I'd be a working president, but this is ridiculous. Anything to get out of that depressing White House every weekend. ISIS this; ISIS that. Merkel this; Merkel that. Warren this; Warren that. What's wrong with Flynn talking to Russians? Some of my best friends and creditors are Russians. How come nobody told me federal judges were appointed for life? Do I attack North Korea if they launch a missile at us? I can't believe Ryan is going to try to find money for that stupid wall. Now they're trying to pin my name on that ridiculous health care plan he came up with. Maybe I can feed that Maddow dame the only legit tax return I have this century to take the heat off the Russia thing. And what the heck is going on with Lindsay Graham and that loser McCain? Is Turkey an ally? Did La La Land win the Oscar or not? Bad dudes in Hollywood. I wonder if Rudy wants his old job back at Justice, or is he ticked I didn't name him ambassador to Russia? Damn, why does the FBI want to talk to me? Melania!? Melania!? Help! They want me to organize the Easter egg roll! Stop hiding in New York!

Related Topic(s): Election; Facebook; Health Care Legislation; Hillary Clinton; President; Republican; Trump Idiot-in-chief; Trump Presidency; Winning, Add Tags
Add to My Group(s)
Go To Commenting
The views expressed herein are the sole responsibility of the author and do not necessarily reflect those of this website or its editors.