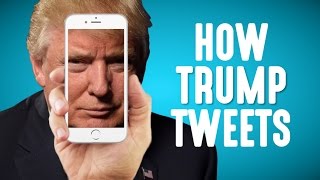 How (And Why) Donald Trump Tweets
(Image by YouTube, Channel: Nerdwriter1)   Details   DMCA

In a series of tweets Friday morning, President Trump confirmed that he is under investigation by the special counsel, former FBI Director Robert Mueller, appointed by his own Department of Justice to look into allegations of collusion between the Trump election campaign and Russian government officials.

Trump seemed to threaten the Justice Department official who appointed Mueller, Deputy Attorney General Rod Rosenstein, tweeting, "I am being investigated for firing the FBI Director by the man who told me to fire the FBI Director! Witch Hunt."

The president was referring to the fact that Rosenstein drafted a memo on why FBI Director James Comey should be fired, and that special counsel Mueller is reportedly including the firing of Comey within the scope of his investigation, as an instance of possible obstruction of justice.

Trump's latest tweets suggested that the raging conflict within the American ruling class -- spawned by differences over foreign policy, in relation to the Syrian war but more generally involving US-Russian relations -- could be reaching a new point of explosion.

The conflict between Trump and his own Justice Department has become increasingly tense and public. Last week, it was widely reported that Attorney General Jeff Sessions had offered to resign because of Trump's criticism of his decision to recuse himself from all investigations related to the Russia and the Trump election campaign, in which Sessions had played a prominent role.

It was widely reported Thursday that Mueller has expanded the scope of the investigation beyond the question of possible collusion between Trump campaign aides and alleged Russian involvement in hacking attacks on the Democratic National Committee and the Hillary Clinton campaign.

The Washington Post reported that Mueller had sought the testimony of several top intelligence officials, including Admiral Michael Rogers, director of the National Security Agency, and Director of National Intelligence Daniel Coats, about Trump's requests that they intervene with Comey to block the Russia investigation.

The New York Times reported that former members of Trump's transition team were given "preservation orders" Thursday to safeguard documents, including electronic records like email, related to the ongoing Russia investigation. A memo from the general counsel of the transition team, cited by the Times, required preservation of records relating to Russia, Ukraine and five former Trump aides, including former national security adviser Michael Flynn and former campaign manager Paul Manafort. It was not clear whether these records would be sought by Mueller, or the various Senate and House committees investigating alleged Russian interference in the US election, or all of these.

The Post also reported that Mueller was looking into possible financial connections between Trump's son-in-law Jared Kushner, now a top White House adviser, and a Russian bank, as well as other financial dealings with Russia on the part of others in the Trump entourage.

Trump's thinly veiled attack on Rosenstein could be a precursor either to Trump demanding that Rosenstein fire Mueller -- which he would likely refuse -- or Trump's firing Rosenstein himself. Or Rosenstein might seek to forestall such a confrontation by recusing himself from further involvement in the Mueller-led probe, on the grounds that his own actions in firing Comey were now a subject of the investigation.

Any of these alternatives would have the same outcome: decision-making authority over Mueller and the Russia investigation would pass into the hands of the third-ranking official in the Department of Justice, Associate Attorney General Rachel Brand, a former Bush administration official who later served as chief counsel for the US Chamber of Commerce.

There were several unconfirmed press reports Friday, citing unnamed sources in the Justice Department, that Rosenstein was preparing to recuse himself. ABC News reported that Rosenstein had already notified Brand that she would take over if he did so.

Right-wing media backers of Trump have been preparing the ground for Trump to fire Rosenstein, Mueller or both. Former House Speaker Newt Gingrich this week called Mueller "now clearly the tip of the deep state spear aimed at destroying or at a minimum undermining and crippling the Trump presidency."

Patrick Martin writes for the World Socialist Website (wsws.org), a forum for socialist ideas & analysis & published by the International Committee of the Fourth International (ICFI).
Related Topic(s): Conflict; Justice Department; Republican; Trump Presidency; Tweet, Add Tags
Add to My Group(s)
Go To Commenting
The views expressed herein are the sole responsibility of the author and do not necessarily reflect those of this website or its editors.