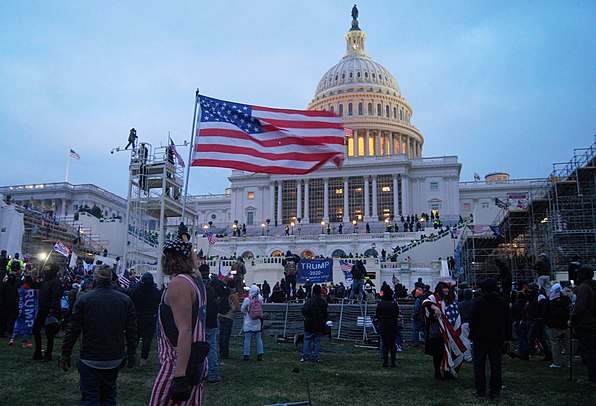 The insurrection on Jan. 6 was planned by Donald Trump and his allies. It did not occur in a vacuum. Trump broadcast long before the election that if he lost he was going to claim the election was stolen from him. Trump's allies were quoted after his loss, anonymously and not, describing what the "plan" was each step of the way, as they alleged invisible fraud in each swing state Trump lost and came up with each new rationale why the votes from those states should be nullified.

After each state certified its vote totals and electors, the Trump team's game plan was, openly, to demand that Congress itself throw out non-Trump electors in sufficient numbers as to nullify the election itself. A large part of this effort consisted of gathering as many far-far-right Trump supporters as possible in Washington on Jan. 6, the date Congress would formally count the electors, explicitly to pressure Congress into throwing out those electors. Trump himself promoted the effort, as House managers in his second impeachment trial laid out tweet-by-tweet, and the event was explicitly timed to turn the assembled crowd, worked into a froth by multiple speakers and finally Trump himself, toward the U.S. Capitol precisely as Congress began counting those votes.

All of this is known and incontestable. It was reported in real time, over the course of months; we all witnessed it.

Though Trump's team has gone to considerably more effort to hide it, we now know that the Jan. 6 event timed to interfere with the counting of electors in Congress was not just promoted by Trump and his campaign, but financed by it as well. New research by OpenSecrets shows that Trump's 2020 campaign and joint fundraising committees made at least $3.5 million in direct payments to those organizing the Jan. 6 event.

This includes a payment to event planners Event Strategies Inc. on Dec. 15, three weeks before the event.

The point is significant because it demonstrates, yet again, two plain facts about the Jan. 6 "rally." First, that the effort to assemble a mass crowd of demonstrators intent on opposing Congress' formalization of the election results, at exactly the point Congress would be doing that formalization, was planned well in advance -- including the attendance of the Trump-supporting violent far right. Second, that the effort was heavily financed by the Trump campaign itself, pouring at least millions into a strategy they hoped would nullify the United States election at the very last opportunity to do so, after all their other attempts had failed. This was not Donald Trump, delusional, ranting in the darkness. This was a planned and organized attempt to nullify the election, carried out by his staff, allies, and complicit Republican lawmakers.

It may have been based on brazen lies and propaganda, but it was a real attempt. The crowd was not in Washington, D.C. on Jan. 6 to merely voice their displeasure over the election results. They had been gathered there to interfere with those results.

Related Topic(s): Capitol; Money; Trump Against Democracy; Trump Children; Trump Crime; Trump Insurrection; Trump Rally, Add Tags
Add to My Group(s)
Go To Commenting
The views expressed herein are the sole responsibility of the author and do not necessarily reflect those of this website or its editors.