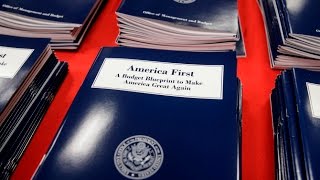 The budget outline issued by the Trump administration Thursday morning is a blueprint for social counter-revolution. It proposes a massive increase in spending on military operations and domestic repression, while slashing domestic social programs by as much as 30 percent and eliminating dozens of agencies and programs outright.

The document deals only with discretionary spending, funds that must be appropriated each year by Congress, accounting for about one-quarter of the $4 trillion that the US government will spend in the fiscal year that begins October 1.

The budget leaves open the fate of the remaining $3 trillion in federal spending, which includes payments under entitlement programs like Social Security, Medicare and Medicaid, and food stamps, as well as other legally required payments, such as interest on the national debt.

The increase in military spending is far larger than that proposed in an initial White House statement last month, which showed the Pentagon budget rising to $603 billion in Fiscal Year 2018. After criticism by congressional hawks like Senator John McCain, and push-back from the military brass, the Pentagon's budget will rise to $639 billion.

Instead of the 50-50 split between domestic and military spending in the discretionary portion of the budget, as prevailed under the Obama administration, the military share will rise to nearly two-thirds of the total, particularly if funding for the Veteran's Administration, the Department of Homeland Security, and the nuclear weapons portion of the Department of Energy budget are included.

There is also a proposed $2.6 billion in funding for building a wall along the southwest US border -- only a fraction of the estimated $25 billion cost of this mad and inhuman project.

The Trump budget proposes the outright elimination of 19 government agencies, most of them long targeted for destruction by ultra-right ideologues and Christian fundamentalists. These include the National Endowment for the Arts; the National Endowment for the Humanities; the Legal Services Corporation, which provides legal services for the poor; the Corporation for Public Broadcasting; AmeriCorps; and the Chemical Safety Board, which investigates industrial disasters in chemical production and transport, including oil-well blowouts like the 2010 disaster in the Gulf of Mexico. Destroying all these agencies saves only $3 billion, less than the cost of US military aid to Israel alone.

This is a budget that promotes death and destroys life. It pours billions into the Pentagon killing machine, at the cost of programs that provide food, shelter, heating, health care and other vital services for the population of the United States.

The biggest single cut is a $5.8 billion reduction in the budget for the National Institutes of Health, which funds a vast array of biomedical research by tens of thousands of health scientists. The biggest percentage cut, 31 percent, is in the Environmental Protection Agency, where 3,200 jobs and 50 programs would be eliminated, including all pollution cleanup operations in the Great Lakes, Chesapeake Bay, Puget Sound and San Francisco Bay. Half of the EPA's budget for research and development is eliminated.

Budget Director Mick Mulvaney declared arrogantly, "You can't drain the swamp and leave all the people in it. So, I guess the first place that comes to mind will be the Environmental Protection Agency." He continued, "The president wants a smaller EPA. He thinks they overreach, and the budget reflects that."

The biggest impact of the budget cuts will be on the urban and rural poor. Trump proposes to abolish the Low-Income Home Energy Assistance Program, which provides $3 billion a year to heat homes in the winter; the Community Development Block Grant program, which spends $3 billion on community development, affordable housing and aid to the homeless; the Appalachian Regional Commission, which promotes economic development and community infrastructure in that region; and the Delta Regional Authority, which does the same in the majority-black delta region of the state of Mississippi.

While Trump ran up huge margins in the popular vote in many impoverished rural counties, his budget wipes out much of the federal spending in those areas. He would eliminate long-distance Amtrak train service and the Essential Air Service, which subsidizes flights to small rural airports, and cut $500 million in Department of Agriculture funding for conservation, waste-disposal and water infrastructure in rural America.

Other significant cuts include $2.5 billion slashed from the Department of Labor for job training programs for seniors and disadvantaged youth, while funding would be increased for the Reemployment and Eligibility Assessment program, which reviews state unemployment claims and verifies eligibility, harassing jobless workers and actually making a profit for the department.

Patrick Martin writes for the World Socialist Website (wsws.org), a forum for socialist ideas & analysis & published by the International Committee of the Fourth International (ICFI).
Related Topic(s): Budget; Pentagon; Spending Priorities; Trump Presidency, Add Tags
Add to My Group(s)
Go To Commenting
The views expressed herein are the sole responsibility of the author and do not necessarily reflect those of this website or its editors.