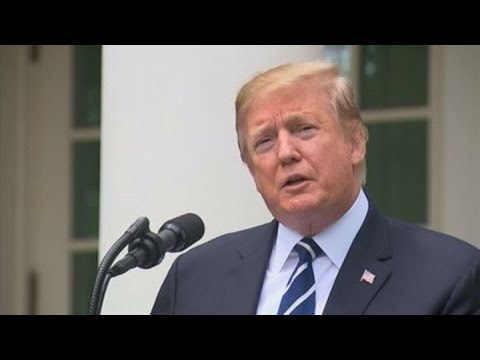 In a press briefing held Monday in the White House Rose Garden, President Donald Trump declared that a death toll of 100,000 to 200,000 in the United States as a result of the COVID-19 pandemic would represent "a good job" by his administration.

Trump's self-congratulating indifference to death on such a massive scale followed by several hours the statement of the coronavirus response coordinator for the Trump White House that 100,000 to 200,000 American deaths was a "best case" outcome of the pandemic, and that the death toll could rise substantially above that figure -- into the millions -- unless "we do things almost perfectly."

The comments by Dr. Deborah Birx shocked her interviewer, Savannah Guthrie of NBC's "Today" show, to the point where she declared that "you kind of take my breath away."

The exchange is worth quoting:

Birx: The worst-case scenario is between 1.6 million and 2.2 million deaths if you do nothing. If we do things together well, almost perfectly, we could get in the range of 100,000 to 200,000 fatalities. We don't even want to see that.

Guthrie: I know, but you kind of take my breath away with that, when I hear you say that's sort of the best-case scenario. If everything works and people do the things you're asking them to do, maybe you can hold the deaths to one to two hundred thousand, in this country.

Birx: The best-case scenario would be 100 percent of Americans doing precisely what is required, but we're not sure, based on the data you're sharing from around the world, and seeing these pictures [of people on beaches and at church services] that all of America is responding in a uniform way and protecting one another. So we also have to factor that in.

The estimate put forward by Dr. Birx is a considerably more ominous projection than that advanced by Dr. Tony Fauci, the top federal infectious disease scientist, in television interviews the day before. Fauci presented the figure of 100,000 to 200,000 deaths as a middle-range outcome that could still be reduced significantly if the correct actions were taken. Birx presented the same number as the best-case scenario, the lowest possible number, and one likely to be surpassed significantly.

The projected minimum death toll of 100,000 to 200,000 people in the United States is more than combined American deaths in the imperialist wars of the past 75 years -- the Korean War, the Vietnam War, the Persian Gulf War, the ongoing conflicts in Afghanistan and Iraq. It is more than the official death toll of 116,500 from World War I, and could quickly approach, as Birx indicated, the US death toll of 405,000 in World War II.

Wall Street, celebrating the trillions that corporations are being handed by his congressional lackeys, took the projection of hundreds of thousands of deaths in stride. The Dow Jones Industrial Average rose 690 points, somewhat more than 3 percent.

The coronavirus epidemic is a massive historical catastrophe, for the United States, for major European countries like Italy, Spain and France, and for the world as a whole.

The death toll worldwide is now approaching 38,000, with 3,708 new deaths, up 500 from the day before by one calculation. Spain suffered 913 deaths, Italy 812, the US 563 and France 418 -- meaning that two-thirds of worldwide deaths took place in four countries with supposedly advanced "First World" health care infrastructures.

The US death toll demonstrates the utter failure of every level of the capitalist state in America -- the federal government, the states and the various localities -- and of all sections of the ruling elite, including the Democratic and Republican parties, the military-intelligence apparatus and the corporate financial oligarchy.

Patrick Martin writes for the World Socialist Website (wsws.org), a forum for socialist ideas & analysis & published by the International Committee of the Fourth International (ICFI).
Related Topic(s): Corona Virus Coronavirus Covid-19; Pandemic; People; Trump Ego; Trump Hypocrisy; Trump Mental Health, Add Tags
Add to My Group(s)
Go To Commenting
The views expressed herein are the sole responsibility of the author and do not necessarily reflect those of this website or its editors.