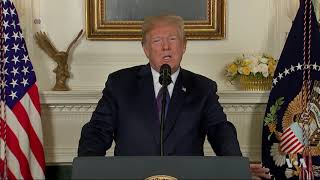 Let's face it, Trump backed himself into a corner. He had to launch a missile strike on Syria-to back up his tough talk earlier in the week- over the alleged chemical attack outside Damascus last Saturday accusing the Bashar Assad government of targeting his own people. The British and French joined in trying to give the appearance of a coalition strike but simply put this was a US led operation.

Apparently there were some 105 missiles fired from two US ships operating in the Red Sea but most were intercepted by Syrian government missiles causing some material damage to three areas struck. One was a scientific research facility 40 miles west of Damascus and two others a storage facility and weapons facility outside of Homs. Only a few minor injuries were reported and no deaths.

Russian President Vladimir Putin condemned the attack as an unlawful violation of international law and not approved by the UN Security Council. He intends to bring it before Council this weekend.

So briefly what has occurred:

The strikes didn't cause much damage and no deaths.

No Russian military facilities were hit.

There apparently was extreme caution to avoid hitting any Russian military facilities.

The strikes did nothing to change the situation on the ground. Assad is still winning the war and all Damascus including E. Ghouda has been liberated by the Syrian Arab Army.

Putin and Russia are taking the high road acting diplomatically.

Russia doesn't seem intent to carry out any retaliatory military measures against the US in Syria.

The Organization for the Prohibition of Chemical Weapons (OPCW) is due to arrive in the Gouda area to assess where the alleged chemical attacks were supposed to have occurred.

In reality all out war has been averted. Some sanity has occurred in US military planning at least for the present. The OPCW is likely to find no chemical weapons attacks even occurred. Russia taking the high road diplomatically rather than taking retaliatory military action as unnecessary will show the world it's the US and the west that are the true aggressors in Syria. The Syrian people generally support Assad and regime change isn't going to happen.

This doesn't mean new US initiated false flag attacks then blaming Assad won't happen in the future. That may be too much to expect. But when the accusations and assertions prove false-as they always do- and Assad remains supported by the Syrian people Trump will follow what the US eventually did in Vietnam "declare victory" -as if they defeated ISIS and al Qaeda-and leave.

Retired. The author of "DECEIT AND EXCESS IN AMERICA, HOW THE MONEYED INTERESTS HAVE STOLEN AMERICA AND HOW WE CAN GET IT BACK", Authorhouse, 2009
Related Topic(s): Assad; Chemical; Missile Strike; Opcw; Putin; Reality; Syria; Trump Crime; Trump Threats; Weapons, Add Tags
Add to My Group(s)
Go To Commenting
The views expressed herein are the sole responsibility of the author and do not necessarily reflect those of this website or its editors.