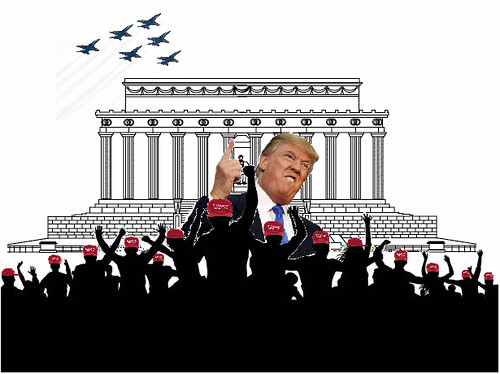 Somehow, a hint of cultism hovers in Donald Trump's seizure of the Republican Party base and its blind devotion to him. Followers scream mindless approval for every wild, irrational, conspiratorial claim he utters.

This pattern is outlined in a new book: The Cult of Trump: A Leading Cult Expert Explains How the President Uses Mind Control, by Simon & Schuster. The author is Steven Hassan, a onetime Moonie who became a top authority on the psychology of demagogues and their flocks.

"Trump's behavior has become both more disturbing and yet increasingly familiar. He relies on phrases like 'fake news,' 'build the wall,' and continues to spread the divisive mentality of us-versus-them. He lies constantly, has no conscience, never admits when he is wrong, and projects all his shortcomings onto others. He has become more authoritarian, more outrageous, yet many of his followers remain blindly devoted... His need to squash alternative information and his insistence on constant ego-stroking are all characteristics of other famous leaders cult leaders."

It says there are "parallels between our current president and people like Jim Jones, David Koresh, Ron Hubbard and Sun Myung Moon... This presidency is in many ways like a destructive cult."

"Donald Trump, who rose to the presidency through a conspiracy theory 'birtherism' and peddled lies in unprecedented ways for a president, needs to be considered as a cult figure."

"The current administration is best understood through cult analogies, including factors such as total authoritarianism and intolerance of any questioning or deviation from the 'playbook.' This is a both a clarifying and a terrifying book."

James A. Haught was born on Feb. 20, 1932, in a small West Virginia farm town that had no electricity or paved streets.  He graduated from a rural high school with 13 students in the senior class.  He came to (more...)

Related Topic(s): Cult; Religion; Scientology; Trump Ego; Trump Mobster; Trumpism, Add Tags
Add to My Group(s)
Go To Commenting
The views expressed herein are the sole responsibility of the author and do not necessarily reflect those of this website or its editors.