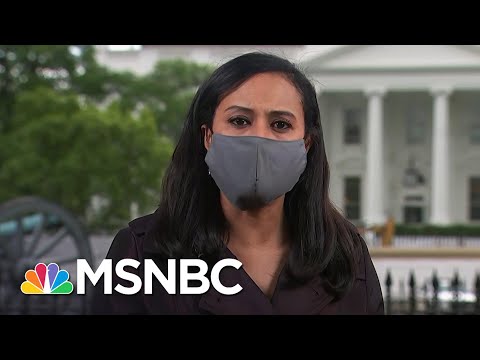 President Trump announced on Twitter a plan to sign an executive order to suspend all immigration amid the coronavirus pandemic.
(Image by YouTube, Channel: MSNBC)   Details   DMCA

On Monday night, Donald Trump announced via tweet that due to the coronavirus the government would shut all immigration to the United States, a move without precedent in American history.

This shameful police state action is a desperate attempt by the Trump administration to distract from the criminality of the ruling class's own response to the coronavirus.

Every element of the official response -- from ignoring the initial warnings to the multi-trillion-dollar corporate handout and the insane efforts to rush workers back to work -- has been to protect Wall Street and guarantee corporate profits no matter the human cost. The result has been economic collapse and death on a mass scale. Yesterday was one of the deadliest days on record and the US is approaching 50,000 total deaths, with no end in sight.

Trump's proposal for a 60-day "pause" on immigration would include all legal applications for immigrant visas and permanent residency. It would, however, exclude guest farmworker visas at the request of large agribusinesses.

The social landscape of the country would be drastically altered by such a move, which would effectively establish a permanent underclass of people who have no avenue to ever access social programs, unemployment benefits or decent-paying jobs.

As tens of millions of Americans confront an indefinite future of mass unemployment, food lines and poverty, Trump's announcement is a dangerous and calculated attempt to scapegoat the most oppressed sections of the working class for the devastating social consequences of the ruling class's bipartisan response.

As usual, Trump announced the new policy in a flippant late-night tweet that contained almost as many lies as total words:

"In light of the attack from the Invisible Enemy, as well as the need to protect the jobs of our GREAT American Citizens, I will be signing an Executive Order to temporarily suspend immigration into the United States."

At yesterday's press conference, Trump absurdly claimed that immigrants are responsible for the lack of medical supplies, scapegoating them for the government's inability to provide adequate medical resources, ventilators and protective equipment for health care workers. Banning immigration was necessary to "help to conserve vital medical resources for American citizens," Trump said, implying that non-citizens deserve to die without any medical care.

Trump also blamed immigrants for the fact that 22 million people filed for unemployment benefits in recent weeks, saying his immigration ban was to "help put unemployed Americans first in line for jobs as we reopen."

Trump's reference to "reopening" workplaces betrays an immediate purpose of his announcement: to use racial and national chauvinism as a tool to distract from and suppress social opposition to the ruling class's efforts to open business and workplaces by Trump's proposed goal of May 1.

Several states, including Georgia and South Carolina, have already begun opening non-essential businesses in advance of Trump's proposed date, despite overwhelming medical evidence that such moves will lead to the deaths of countless thousands more.

But Wall Street is demanding the right to exploit the working class with no restrictions and with no attention to how many will die. While millions of laid-off workers are still awaiting their stimulus and unemployment checks, trillions of dollars were transferred to the banks and corporations overnight under the bipartisan CARES Act.

Corporate America is preparing for millions to go back to work by legally protecting itself against any responsibility for the forthcoming surge in deaths.

Related Topic(s): Corona Virus Coronavirus Covid-19; Immigration; Immigration Control; Jobs; Trump Border Wall; Trump Hates Immigrants; Trump Tweets; Trump Wall Against Mexico, Add Tags
Add to My Group(s)
Go To Commenting
The views expressed herein are the sole responsibility of the author and do not necessarily reflect those of this website or its editors.