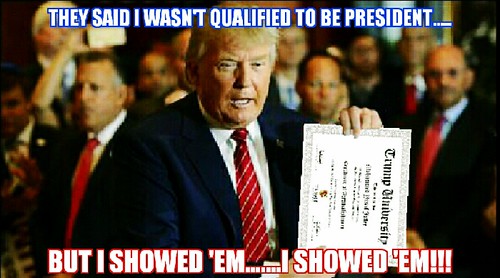 Trump
(Image by IoSonoUnaFotoCamera)   Details   DMCA
Trump's name is strongly associated with words such as racist, bully and liar. Yet, 30 to 40 percent of Americans accept and even revel in his behavior, abandoning notions of decency that used to be commonly accepted (and intermittently practiced) by the rest of us. The lengthy expose' of Trump's sleaziness during the Michael Cohen hearings (Feb. 2019) prompted the late Rep. Elijah Cummings to sum up in what has become a meme among respectable Democrats: "We are better than this." But how much better are "we" really?

Richard Eskow has an interesting reply to this question. Although many members of our elite condemn Trump's overt arrogance and narcissism, they may be reacting to an uncensored exhibition of what they (fear to) see in themselves: "He is the Id of the American ruling class, the uninhibited creature summoned up from the darkest recesses - of their psyches." Like Trump, they take their wealth, status, and power as deserved, as recognition of their talent, competitiveness and "good genes." Never mind the advantages of inherited wealth or the way that the politicians they fund have rigged the rules of the market and the tax system in their favor.

Our ruling class has converted the "land of opportunity" into a burgeoning plutocracy with declining social and economic mobility. According to a Pew Center report (Jan. 2020), "the wealth gap between America's richest and poorer families more than doubled from 1989 to 2016." This period includes the administrations of Bush 1 and 2 and of corporate Democrats Clinton and Obama.

In their new book, The Triumph of Injustice, noted economists Saez and Zucman show that Trump's 2017 tax cut has the wealthiest 400 families paying a lower tax rate than the bottom 50% of households for the first time in history. During the first 6 months of the pandemic, the total wealth of the 645 U.S. billionaires rose by $845 billion--a 29% increase. In this same period, over 6 million people were infected and 200,000 died from the virus. Twenty million lost their jobs, 7.7 million of whom also lost employer-based health insurance. Food banks struggled to keep up with surging demand.

One of the most striking features of Trumpism is disrespect. He displays it toward everyone and every institution that gets in his way. He has polluted public discourse with his constant name-calling, insults, and open disdain for scientific authority and expertise. His supporters saw him as trashing an upper class that has disrespected workers for too long. His disrespect channeled their outrage. If it hadn't been for COVID-19, Trump's ugly theatrics might have gotten him re-elected. Instead, his disastrous incompetence and dishonesty during the pandemic is letting even his base glimpse the nakedness of their wannabe emperor.

We should not let the GOP and corporate Democrats treat racism as an issue separate from economic oppression. American racism tends to push people of color into a world of substandard housing and jobs without a living wage. There should not be such a world. Neoliberals want to say we have achieved equality when a person of color can be President or a billionaire. They want a society with racial diversity in its oppressor class. As Martin Luther King said in Memphis in 1968: "Our struggle is for genuine equality, which means economic equality."

There is a kind of respect that would usher in the revolution envisioned by King, a respect by the government for people and by people for each other. It is the respect called for in the Declaration of Independence: "We hold these truths to be self-evident, that all men are created equal, that they are endowed by their Creator with certain unalienable Rights." These include "the pursuit of Happiness." Can a government "secure these rights" without guaranteeing adequate housing, education, food, and health care? Can there be a "right" to health care without universal health care?

Related Topic(s): Equality; Politics Of Contempt; Trump; Trump Anger; Trump Bully In Chief; Trump Coronavirus Response; Trump Ego; Trump Insults; Trump Lack Of Dignity; Trump Support; (more...) Trump Tax Bill, Add Tags  (less...)
Add to My Group(s)
Go To Commenting
The views expressed herein are the sole responsibility of the author and do not necessarily reflect those of this website or its editors.