"Either this nation will killl racism, or racism will kill this nation." (S. Jonas, Augut, 2018)

Trump, the Trumpublicans (tm) in the Congress and elsewhere in the Republican Party (where there are very few members who are not Trumpublicans [tm]), and at the Propaganda Channel , are hard at work promulgating two hypotheses (conspiracy theories, actually) about Trump's enemies. Both are intended to distract attention from what could really bring him down: even partial disclosure of his financial-related crimes over the years. 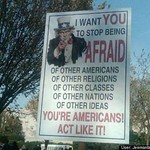 Uncle Sam Says: .just take out the word 'Stop,' the syllable 'ing,' and add the word .White. between the words .You're. and .Americans,. and you've the Trumpublicans down to a .T. (for Trump, that is).
(Image by JoeInSouthernCA)   Details   DMCA

One of these distractors is the continuation of the Hannity-forever-spiel that the original investigation of the Trump campaign that began in the summer of 2016, was the result of a conspiracy by the "Deep State" to unravel him, even before he became President. It is claimed that there was a totally false link of Trump with Russia interests, and with Russian interference in the 2016 election, on his behalf. The problem for the Trumpites is, as is well-known (to the minority of the country, but to the majority in the Congress, Democratic) the Mueller Report a) shows extensive Trumpite collusion with the Russians (although not with a provable rising to criminal conspiracy), and b) about ten instances of Presidential obstruction of justice. As is also well-known, according to about 900 former Federal prosecutors that level of involvement would rise to the level of the indictable, were the perpetrator anyone other than the President. (This does not of course prevent Trump, Huckabee Sanders, Hannity, et al, from Trumpeting "no collusion, no obstruction" on every possible occasion).

BUT, specifically, the Trump/Hannity/Barr Cardinal sin (and two of those three are Catholics) in this version of events is the promotion, by Trump's distractors/attackers, of the "Steele Dossier" as a central element in developing the Trump/Russia thesis. According to them it was "bought and paid for by the Clintons" of course, and widely used, when it actually began its existence with anti-Trump Republican money, and was little used, either by FBI or the Clinton campaign. And of course, there is the use of the terms "spying" and "treason" (in the real world both crimes involving foreign actors/interest) very dramatic, first by the President, then by his closest personal attorney, oops, I mean the Attorney General, Bill Barr. 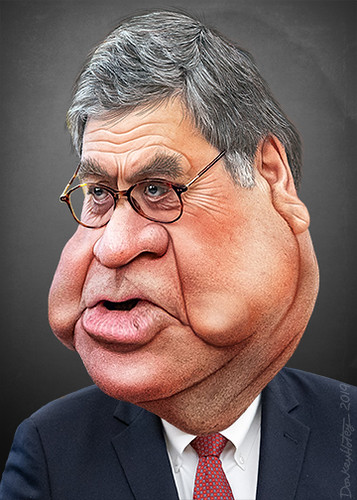 William Barr - What's he hiding in those cheeks?
(Image by DonkeyHotey)   Details   DMCA

Barr, of course, as is well-known, began his shilling for the President by presenting his own semi-fictional version of the Mueller Report. So, with all of the confusion intentionally created around the Report and what it really says about the events that led to its initiation, the Trumpublicans trumpet: "look over here, look over here; witch hunt, witch hunt." (For a solid version of the true origins of the whole investigation of Trump-Russia connections, which actually began in 2013 with the legal, FISA-authorized bugging of Carter Page, see the Jane Mayer story also referenced above.)

The other current distractor for the Trumpites from what they are really concerned with, the money stuff, just happens to be, coincidentally, very, very dangerous for the future of Constitutional Democracy in the Republic. That is the indictments that have been issued against Julian Assange, for the publication of classified information which was provided to him by leak, or in his case almost certainly indirectly from the Russian government, which had obtained it by hacking. This case, if successful, could result in shutting down a major function of the free press in the United States. (Chief Justice Roberts, will be the swing vote on this one. OMG!) Of course to proceed here, they first have to get Assange extradited, not an automatic.

OK, OK. So, to repeat, these are the two major initiatives undertaken by the Trumpublicans (tm), who are getting evermore desperate in the matter of Trump and his crimes, in order to distract attention what could really sink Trump in the end. The Trumpublicans (tm) want you to "Look Over Here." But over there is the financial information about Trump and his crimes in that realm. If it ever gets out, one way or another, Trump will be in real trouble, and he knows it. It may not be his death knell, for so far, he has always escaped from one situation after another which seemed to meet that definition. But it just might be, and I think that they think so too. And further, think Al Capone, who the Feds eventually got on income tax invasion, not his many, many more serious, crimes (thanks to my son Jacob for this note).

Just think of the possible list of crimes, which in numbers on official government and bank documents, could be documented: tax fraud (understating wealth and income, if there is any, which would be revealing in itself), tax evasion, insurance fraud (mis-stating property values), bank fraud (to Deutsche Bank, Chase, and others), money laundering, violation of the Emoluments clause, myriad Russian connections over-the-years, and greatly understating/overstating (at different times) wealth, for a variety of potentially illegal purposes, campaign finance law violations, pure bribery and attempted (proposed Moscow TrumpTower). 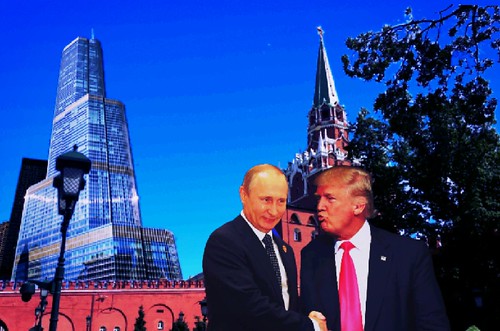 Trump Gets His Tower In Moscow, and Putin gets his 50 million dollar penthouse. But that's not bribery, is it? And Putin would not have had anything on Trump if the project had gone through, would he?
(Image by IoSonoUnaFotoCamera)   Details   DMCA

Mike Cohen had testified to the existence of many of these elements, but he is a convicted perjurer. But then there are the Trump organization's top money-man, Allen Weisselberg, and Trump's personal accounting firm Mazar's USA. And then there is Deutsche Bank. And coming back to Cohen, forgetting about his words, there is the ton of documents seized last year from his several offices. And of course, there is the new New York State law (which will likely also be challenged in court by the Trumpites) which could get his NYS tax returns to the Congress.

Trump may still be able to block the release all of this "financial stuff." But he has much less of chance of doing so, at least for all of it, than he has for blocking Congressional testimony on Trump/Russia and obstruction of justice.

And by the way, much of the talk about impeachment revolves around the issue of "getting everything" about Trump and his crimes-and-corruption "out in the open." Who is to say that he couldn't stop, or at least significantly delay, testimony in an impeachment process just as he has done so far in regard of regular House Committee testimony by a wide variety of people? But exposing even some of his financial crimes, with numbers on paper, would be much more difficult for him to deal with. So, distract, distract, distract.

Author's note: In the title, the (tm) is for fun. I have no intention of attempting to register it.

Steven Jonas, MD, MPH, MS is a Professor Emeritus of Preventive Medicine at StonyBrookMedicine (NY) and author/co-author/editor/co-editor of over 35 books. In addition to his position on OpEdNews as a â€œTrusted Author,â€ he is a Senior (more...)
Related Topic(s): Assange; Fraud; Impeachment; Investigations; Republican; Trump Against Democracy; Trump And Putin; Trump Apologists; Trump Attacks Media; Trump Attacks Media As Enemy Of The People; (more...) Trump Banking; Trump Dossier; Trump Finances; Trump Illegality; Trump Impeachment; Trump Putin; Trump Racist; Trump Russia Connection, Add Tags  (less...)
Add to My Group(s)
Go To Commenting
The views expressed herein are the sole responsibility of the author and do not necessarily reflect those of this website or its editors.