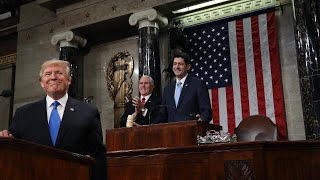 The State of the Union is strong. I mean, President Trump didn't trip and tumble off the platform in a real life homage to Chevy Chase, or press a red Staples button on the podium and announce that he'd just launched a fleet of cruise missiles toward North Korea, or order special counsel Robert Mueller led into the House of Representatives blindfolded and in handcuffs, or gaze out toward Melania and ask for a divorce (since the state of his union is reportedly weak). As one cable TV pundit solemnly declared afterwards, "Donald Trump became president tonight." OK, actually I wrote that at 7:39 p.m., 81 minutes before the speech even began -- but we all know someone must have said that.

The truth? A teleprompter just rolled off the best speech of Donald Trump's presidency, a sniffle-punctuated litany of praise for God, the troops and mythical clean coal from America's first reality-show president. And Teleprompter Trump certainly said ... some of the right things.

He promised Democrats that he's ridiculed, such as Cryin' Chuck Schumer and Sen. Elizabeth "Pocahontas" Warren, that he is now "extending an open hand to work with members of both parties, Democrats and Republicans, to protect our citizens, of every background, color and creed." That statement explicitly excluded 800,000 "Dreamers" facing imminent deportation to nations they barely know, but the president did pledge to work for some kind of deal on immigration and to finally do something about America's crumbling infrastructure.

He also hailed the heroes of Houston's flood and the Las Vegas and congressional softball shootings -- a splendid and praiseworthy moment that nonetheless allowed the president to address those topics without mentioning climate change or America's lax gun laws, two of the many real-life problems that don't exist in Trump World. And any would-be immigration deal was undercut by his shameful willingness to demagogue a handful of murder cases to stir up xenophobia against all migrants, especially brown ones.

Forty-three years later, the real news was not what was in the speech but what was swirling all around it.

The aggrieved First Lady went to the Capitol in a separate limo, the ship that launched a thousand wagging tongues. Some members of the Congressional Black Caucus boycotted the speech, not too surprising considering the president's "shithole countries" slam on Africa or his Charlottesville moral fumble, and other Democrats stayed away, like Illinois Rep. Jan Schakowsky who told CNN she didn't want to listen to "a sexual predator." And an adult-film star allegedly paid $130,000 not to talk about her affair was Trump was teed up to give a rebuttal on ABC's Jimmy Kimmel.

Did I mention that the State of the Union is not good, not at all? In the hours before the speech, CNN and other news outlets were reporting that Trump may refuse to give Mueller an interview about alleged campaign collusion with Russia and obstruction of justice, that he might actually fire Mueller, and that the president is about to release a slanted, classified memo aimed at tarnishing the FBI and taking down Mueller's probe. Meanwhile, the White House is refusing to implement a Russia sanctions law that passed Congress nearly unanimously -- his latest and most serious dictator move.

Sen. Claire McCaskill pegged the moment for what it is: A constitutional crisis.

Related Topic(s): State Of The Union Speech; Teleprompter; Trump Cruelty; Trump Ego, Add Tags
Add to My Group(s)
Go To Commenting
The views expressed herein are the sole responsibility of the author and do not necessarily reflect those of this website or its editors.