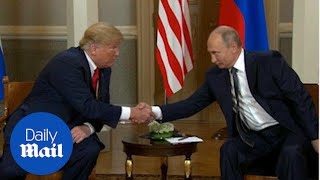 Donald Trump comes face to face with Vladimir Putin in Helsinki - Daily Mail The summit at the Finnish Presidential Palace in Helsinki consists of a one-on-one meeting and a larger working lunch, and will conclude with a joint news ...
(Image by YouTube, Channel: Daily Mail)   Details   DMCA

So let's see now. Trump is in Helsinki, Finland about to meet Russian President Vladimir Putin-more on this later. This after a few days in London berating British Prime Minister Teresa May over her mishandling of Brexit and days after the NATO summit in Brussels where Trump lambasted the Europeans over not paying their fair share to their own security singling out Germany and its Chancellor Angela Markel in particular saying she's a "captive to Russia" by partnering with Russia to build Nord Stream II the natural gas pipeline running under the Baltic Sea from Russia directly into Germany.

Then there's the Trump crowds ongoing threats toward Iran threatening sanctions to any country buying Iranian oil after November 4. Iran has responded with its own threats with President Hassan Rouhani and the senior adviser to Iran's Supreme Leader Ayatollah Ali Khamenei saying, "If Iran cannot export oil through the Persian Gulf no-one will do this. Either everyone will export, or no one."

Essentially Iran has threatened to block the Strait of Hormuz, the narrow artery through which crude oil is transported not only from Iran, but Saudi Arabia and the United Arab Emirates' as well as natural gas from Qatar. Some analysts predict oil could escalate to $250 per barrel if the Strait were blocked by Iran.

This all happening after Trump pulled the US from the Iran nuclear deal.

Today he meets Putin. Firstly, we need to get past all the nonsense from the US corporate MSM, its whacko pundits hyperventilating that Trump's a stooge of Putin.

Special Prosecutor Robert Mueller's investigation has produced no factual evidence of Russian interference getting Trump elected since it began in May 2017. The so called hacking into the DNC and Hillary Clinton's campaign was long ago debunked by Ray McGovern's "Veteran Intelligence Professionals for Sanity" saying there was an internal leak transferred locally and not a hack. Despite the latest grand jury indictments of 12 Russians into the alleged hacking Mueller's investigation has become a fishing expedition which Trump correctly says is a witch hunt.

Meanwhile Democratic leaders Nancy Pelosi, Senator's Chuck Schumer, Tammy Duckworth and Mark Warner wanted Trump's summit with Putin cancelled over what they claimed would be Trump's inability to set down a challenge to Putin.

Let's get real. Any summit between the leaders of the world's two nuclear superpowers is a good thing. When "Dubya" Bush withdrew the US from the 1972 ABM "Anti-ballistic Missile" treaty in June 2002 it was interpreted by Russia and Putin the US intended to build a missile defense system and destroy MAD, mutually assured destruction the idea neither side would initiate a nuclear first strike knowing they would be annihilated in retaliation.

So the Russian's embarked on a crash course in advanced nuclear missile technology developing hypersonic missiles virtually impossible to detect that Putin announced to the Russian Federal Assembly-and indirectly the Pentagon- on March 1 of this year.

Besides the nuclear issue there's Syria, Ukraine, Crimea, North Korea, Iran. Issues where the US and Russia are "officially" at odds. This summit won't resolve these issues and this writer can't predict the outcome. But it could begin to initiate detente, an ongoing dialogue, stop the demonizing of Putin and Russia so the future of the world won't result in mushroom clouds destroying life on Earth.

Of course climate Armageddon is unlikely to be on the summit agenda but who knows Trump might have an epiphany reversing his climate denial. Crazier things have happened with this unpredictable guy.

Retired. The author of "DECEIT AND EXCESS IN AMERICA, HOW THE MONEYED INTERESTS HAVE STOLEN AMERICA AND HOW WE CAN GET IT BACK", Authorhouse, 2009
Related Topic(s): Dialogue; Issues; Trump Putin Summit, Add Tags
Add to My Group(s)
Go To Commenting
The views expressed herein are the sole responsibility of the author and do not necessarily reflect those of this website or its editors.