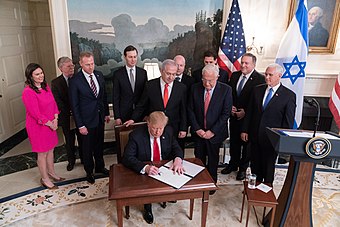 On September 14, US president Donald Trump tweeted (of course) the suggestion of a US-Israel "Mutual Defense Treaty," citing a call with Israeli prime minister Benjamin Netanyahu.

Hopefully there's less going on here than meets the eye: The tweet may just be another mutual publicity back-scratch of the type Trump and Netanyahu frequently exchange when they find themselves in political pickles. And Netanyahu is likely in the biggest such pickle of his career.

After failing to put together a ruling coalition in the wake of April's general election, Netanyahu called another election for September 17.

Netanyahu also faces imminent indictment on three corruption charges, with a court hearing on the charges scheduled for early October. In June, his wife Sara took a plea deal and paid a fine for misusing state funds.

Netanyahu's personal future may well depend on him having a political future. He's pulling out all stops to change the April results, from approving new Israeli squats ("settlements") in, and even promising to annex parts of, the occupied West Bank, to conducting military attacks in Syria and Iraq and along the Lebanese border.

Talk of a "Mutual Defense Treaty" with the US may well drive some badly needed votes his way, especially to the extent that such a treaty might be thought available only to Netanyahu and his Likud Party but not to Benny Gantz's Blue and White alliance (the platform of which, by the way, bars indicted politicians from serving in the Knesset, Israel's legislature).

The US doesn't need Israel's assistance to defend itself. It already spends far more than any other state in the world on its military, that amount is many multiples of any amount reasonably related to actual defense, and it faces no existential military threats other than attack with nuclear-armed intercontinental ballistic missiles, which Israel couldn't plausibly reduce.

Israel hasn't faced a military threat to its existence since 1973, and given the web of US-influenced and US-financed relations it's created with Egypt, Jordan, and Saudi Arabia, isn't likely to face any such threat not of its own making for the foreseeable future .

As for peace in general, Trump proposes a "Mutual Defense" pact with a rogue nuclear garrison ethno-state in a tinderbox region. What could possibly go wrong?

A "Mutual Defense Treaty" with the US would only encourage further bad behavior and saber-rattling on the part of the Israelis toward e.g. Iran and Syria. That's the kind of behavior bound to eventually CREATE a real military threat, resulting in the Israelis demanding US support pursuant to the treaty, on a claim of "Mom, he hit me back FIRST."

It's time for the US to start furling its post-World War Two "security umbrella" instead of inviting suspect new partners to join it beneath that umbrella. America's future, if it is to have one, requires a non-interventionist foreign policy.

Related Topic(s): American Foreign Policy; Donald Trump; Israel; Prime Minister Benjamin Netanyahu, Add Tags
Add to My Group(s)
Go To Commenting
The views expressed herein are the sole responsibility of the author and do not necessarily reflect those of this website or its editors.