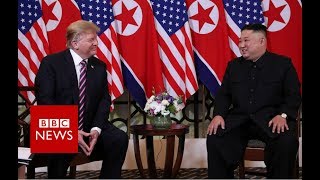 President Trump and North Korean leader Kim Jong-un shook hands as they met on Wednesday night at a formal dinner in Hanoi, Vietnam to begin round two of formal talks set for tomorrow.

Formal talks to discuss what? No agenda has been released.

North Korea giving up its nuclear weapons? In a good faith gesture after they met in Singapore last year Kim unilaterally put a moratorium on weapons testing.

Trump agreeing to formally end the Korean war with the North? The Hot war ended in a truce in 1953 so technically we're still at war.

Ending US sanctions against the North? To date there's been no sanctions relief.

Removing all US troops from South Korea? Their presence has been justified because the war is still not over.

End US war games off the Korean peninsula with South Korea and Japan? Which the North considers a provocation.

Who knows for sure as speculation runs rampant on these things. One would think Kim giving up his nuclear weapons is as always numero uno on Trump's and the US agenda but from here that's a non-starter for Kim as those weapons are the reason the US hasn't attacked the North. So unless the Trumpster is ready to sign a formal peace agreement ending the war, end all sanctions against the North, remove all US troops from the South-thus ending any justification for them being there, plus with a signed peace treaty there's no basis for having war games against a now friendly country then and only then would the issue of the North's nuclear weapons be on the table. Yet considering the US sordid history of reneging on treaties it has signed with adversaries beginning with America's indigenous people's with every treaty it signed having been broken by the US government. Then more recently Trump removing the US from the Iran nuclear treaty in 2017 clearly reveal he and the US are not exactly trustworthy "partners" when it comes to "finalizing" any treaty. To be sure that's not lost on Kim.

So...at any rate the "ball" is clearly in the US court. The North has wanted a formal ending of the war since the truce in 1953. It's the US that's been intransigent. The least Trump can do is agree to formally end the war. If Trump won't commit to that they'd just as soon talk about the weather.

As it is South Korea under President Moon has reached out to Kim and the two had a summit meeting at the demilitarized zone months before Trump and Kim met in Singapore. Moon has since traveled to the North and met Kim in Pyongyang. So there is definitely detente going on between the two Korean heads of state. Moon knowing the vanity of Trump has even taken a back seat remaining in the shadows on these Trump/Kim summits even though it was he who first promoted the idea to Trump.

Then with Trump there's always something else to consider. Whatever he might agree to with Kim at the summit, the "Donald" could contradict in a tweet before his plane lands at Andrews AFB.

Lest we forget there's Trump's coterie of war-mongering, neo-con belligerents he has surrounded himself with. The likes of Bolton, Pence, Pompeo-along with convicted felon Elliott Abrams as Trumps special envoy to Venezuela-all of whom thirst for war and regime change seem to be their reason for being. Their influence on Trump can't be dismissed. Plus Bolton seems to contradict anything Trump says almost immediately-as he did when Trump said all troops in Syria would be coming home which was changed to only when ISIS is defeated there and Iran leaves the country.

So with Trump and his advisers acting as they do used car salesmen and Mafia godfathers are more to be trusted.

Retired. The author of "DECEIT AND EXCESS IN AMERICA, HOW THE MONEYED INTERESTS HAVE STOLEN AMERICA AND HOW WE CAN GET IT BACK", Authorhouse, 2009
Related Topic(s): Donald Trump And Kim Jong Un; Meeting, Add Tags
Add to My Group(s)
Go To Commenting
The views expressed herein are the sole responsibility of the author and do not necessarily reflect those of this website or its editors.