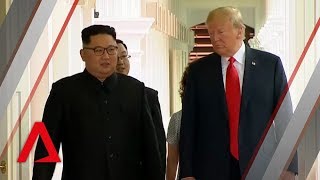 Beyond a generalized joint statement whereby Trump committed to provide security guarantees to North Korea and Kim reaffirming his firm and unwavering commitment to complete denuclearization of the Korean Peninsula then Trump later saying he'd suspend military exercises on the Korean Peninsula admitting they were "very provocative" the statement concluded with there be "follow-on negotiations...at the earliest possible date to implement the outcomes...to join their efforts to build a lasting and stable peace regime.

After the summit Kim said, "We had a historic meeting and decided to leave the past behind...the world will see a major change". For his part Trump said, "We're very proud of what took place today. I think our whole relationship with North Korea and the Korean Peninsula is going to be a very much different situation than it has in the past".

So...little beyond these generalized statements and Trump saying he'll suspend military exercises not much else concrete was officially agreed to i.e. the US ending economic sanctions against North Korea, signing a peace treaty formally ending the Korean war, a formal written guarantee North Korea won't be attacked and US troops leaving South Korea before North Korea agrees to give up its nuclear arsenal et al but maybe these issues being resolved would be too much to ask for such an initial meeting between the antagonists.

These issues are where "the rubber meets the road". Let's face it this was better than these two impulsive men just months ago hurling insults and taunting one another from a distance.

Maybe there was a real breakthrough or maybe it was merely shadow boxing. It's hard to say.

This just in. As for "follow-on negotiations" the "Daily Beast" just reported Secretary of State Mike Pompeo and Trump's National Security Adviser are to meet next week with North Korean officials "to start hammering out details on a program of denuclearization that were absent from the summit in Singapore".

As improbable as this summit was between Trump and Kim we now have Pompeo and Bolton doing "follow-on negotiations" with the North Koreans. I probably shouldn't say they're an evil two headed serpent with regards to North Korea-with each saying they want to go to war against Kim and the North-Pompeo as Trump's CIA director and Bolton as a talking head on Fox News-but how this duo from hell is going to get Kim to "hammer out details for the North's denuclearization"... I imagine is tantamount to putting a gun to Kim's head and saying "do it or else". Is that too harsh?

I don't know but diplomacy has been turned on its head with Trump as the ringleader so who knows what to expect next.

But unless I'm a complete fool Kim isn't going to give up his nuclear arsenal-the only thing that has prevented the US from taking out his regime-without a formal peace treaty ending the Korean war, a formal written guarantee the North won't be attacked, end US economic sanctions on the North and finally removing all US troops in South Korea.

Are Pompeo and Bolton ready to accede to what I believe are the fundamental requirements necessary before Kim agrees to forego his nuclear arsenal ?

I guess we'll just have to wait and see.

Retired. The author of "DECEIT AND EXCESS IN AMERICA, HOW THE MONEYED INTERESTS HAVE STOLEN AMERICA AND HOW WE CAN GET IT BACK", Authorhouse, 2009
Related Topic(s): Kim Jong-un; Korea; Meeting; Negotiation; Trump Diplomacy, Add Tags
Add to My Group(s)
Go To Commenting
The views expressed herein are the sole responsibility of the author and do not necessarily reflect those of this website or its editors.