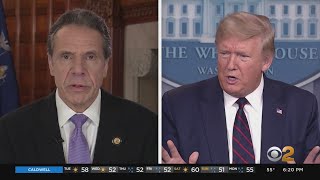 To wit here's Trump, "My administration will not allow Federal tax dollars to fund cities that allow themselves to deteriorate into lawless zones...it is imperative that the Federal Government review the use of Federal funds by jurisdictions that permit anarchy, violence, and destruction in America's cities". In a memo to the Attorney General and Office of Management and Budget Trump went to threatening to withhold federal funds from New York City-specifically naming Mayor de Blasio and Governor Cuomo, Portland, Seattle and Washington, D.C. specifically naming Mayor Muriel Bowser.

Here's Cuomo's response to Trump, "is that a threat? He can't have enough bodyguards to walk through New York City. Forget bodyguards he better have an army if he thinks he's going to walk down the streets of New York. New Yorkers don't want anything to do with him".

What to make of these threats and accusations by a president and big state governor? They have to be politically driven outbursts to fire up their adherents. Dems who froth at the mouth of anything Trump and to Trump's Repub followers who defend him no matter what.

It's hard to imagine the country being so divided withc such implacable foes.

One might have to go back a hundred and sixty years ago to the time before the Civil War to find the country so divided.

Retired. The author of "DECEIT AND EXCESS IN AMERICA, HOW THE MONEYED INTERESTS HAVE STOLEN AMERICA AND HOW WE CAN GET IT BACK", Authorhouse, 2009
Related Topic(s): Cuomo; Trump; Trump Threats, Add Tags
Add to My Group(s)
Go To Commenting
The views expressed herein are the sole responsibility of the author and do not necessarily reflect those of this website or its editors.