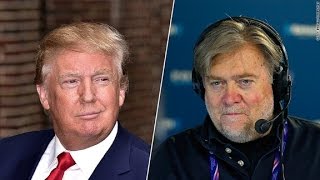 Donald Trump has reorganized the National Security Council -- elevating his chief political strategist Steve Bannon, and demoting the Director of National Intelligence and the Chairman of the Joint Chiefs of Staff.

Meanwhile, the Director of National Intelligence and the Chairman of the Joint Chiefs of Staff will now attend meetings only when "issues pertaining to their responsibilities and expertise are to be discussed," according to the presidential memorandum issued Saturday.

Political strategists have never before participated in National Security Council principals meetings because the NSC is supposed to give presidents nonpartisan, factual advice.

But forget facts. Forget analysis. This is the Trump administration.

And what does Bannon have to bring to the table?

In case you forgot, before joining Donald Trump's inner circle Bannon headed Breitbart News, a far-right media outlet that has promoted conspiracy theories and is a platform for the alt-right movement, which espouses white nationalism.

This is truly scary.

Here's the big worry. Trump is unhinged and ignorant. Bannon is nuts and malicious. If not supervised by the Joint Chiefs of Staff, their decisions could endanger the world.

In Trump's and Bannon's view, foreign relations is a zero-sum game. If another nation gains, we lose. As Trump declared at his inaugural: "From this day forward, it's going to be only America First."

Some of you are old enough to recall John F. Kennedy's inaugural, when the young president pledged to support any friend and oppose any foe to assure the success of liberty.

But Trump makes no distinction between friend and foe, and no reference to liberty. As conservative commentator Charles Krauthammer observes, Trump's view is that all other nations are out to use, exploit and surpass us.

Related Topic(s): American Foreign Policy; National Security Council; Steve Bannon; Trump Cabinet, Add Tags
Add to My Group(s)
Go To Commenting
The views expressed herein are the sole responsibility of the author and do not necessarily reflect those of this website or its editors.