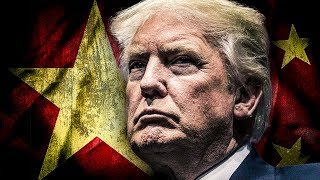 Trump Jokes About Ending Presidential Term Limits And Being President For Life
(Image by YouTube, Channel: The Ring of Fire)   Details   DMCA

Three months ago, President Trump retweeted the suggestion of an ultra-right supporter, evangelical preacher and Liberty University boss Jerry Falwell Jr., that his term in office be extended by two years to compensate for the two years allegedly stolen from his presidency by the Democratic-inspired investigation into supposed connections between the Trump campaign and Russia.

This was a direct threat to violate the US Constitution, which limits the term of a president to four years, but it was presented as a joke by Trump's political and media accomplices in the Republican Party and Fox News. This interpretation was largely accepted by his official opposition, the Democratic Party, and the nominally liberal media aligned with it.

The World Socialist Web Site, however, warned: "Trump's re-tweet of a prominent, politically active evangelical preacher is not a joke. It is a signal sent deliberately to both supporters and opponents, who will understand that Trump is serious and that he is prepared to pursue anti-constitutional methods to stay in power. It is part of an increasingly dictatorial pattern that Trump and his fascist advisers have long planned."

We cited a series of similar utterances in which Trump complained about the four-year presidential term and the two-term limit on a presidency set by the 22nd Amendment to the Constitution, which together combine to limit any individual's tenure in the White House to eight years.

Now Trump has chosen to raise the issue again, although once again it is presented as a joke, with the threat of a brazen constitutional violation dismissed by the corporate media, which barely reported his remarks. The comments were made in the course of Trump's opening remarks at a Tuesday afternoon appearance at the Shell Pennsylvania Petrochemicals Complex in Monaca, Pennsylvania, about 40 miles northwest of Pittsburgh.

In actuality, most state-by-state polling throughout the summer has shown Trump with a net unfavorable rating in states accounting for 419 of 538 votes in the Electoral College, and trailing many of the leading contenders for the Democratic presidential nomination by significant margins. Polls conducted 15 months before November 3, 2020 cannot predict the outcome of the election, but they demonstrate the wide popular hostility towards the president and reflect, in a very distorted way, the growing movement in the working class against his administration.

Trump went on to denounce media reporters sitting in a section at the rear of the audience, pointing them out and asking, "Can you imagine if I got a fair press? I mean, we're leading without it. Can you imagine if these people treated me fairly? The election would be over. Have they ever called off an election before? Just said, 'Look, just -- let's go. Go on. Four more years.' Yeah."

Here the president of the United States is mulling over in public the possibility of canceling the election, on the grounds of his supposedly overwhelming and unchallengeable popularity.

Trump's supporters evidently found these jibes funny, as they repeatedly interrupted him with laughter. But the substance of his performance is not a laughing matter.

The president of the United States, the commander-in-chief of the most powerful repressive force on the planet, the US military-intelligence apparatus, is publicly floating the suggestion that he might stay in office past the constitutionally mandated end of his second term (should he win in 2020). The implication is that Trump could remain in power indefinitely.

If it were Russia's Vladimir Putin or Nicholas Maduro of Venezuela, or some other world figure on the outs with Wall Street and Washington, the American media would be ablaze with denunciations. But in the case of Trump, the Democratic Party and the corporate media -- even the majority that is presently hostile to Trump -- choose to treat such remarks unseriously, as nothing more than joking or narcissistic ramblings, concealing the fact that the Trump administration is a deadly threat to the democratic rights of the American people.

Trump is well aware that he lost the popular vote by some 3 million ballots in 2016 and that his reelection is by no means assured, despite the bankrupt and right-wing campaign the Democrats are once again preparing to wage. Under conditions of mounting recession and financial turbulence and growing working-class opposition, he is at the very least seeking to condition his fascistic base to reject the outcome should he lose in 2020 and challenge the result through extra-constitutional means. During the 2016 campaign he repeatedly suggested that he would not accept the official result if it went against him.

Patrick Martin writes for the World Socialist Website (wsws.org), a forum for socialist ideas & analysis & published by the International Committee of the Fourth International (ICFI).
Related Topic(s): Presidency; Trump; Trump Against Democracy; Trump Threats; Trump Wants Presidency For Life, Add Tags
Add to My Group(s)
Go To Commenting
The views expressed herein are the sole responsibility of the author and do not necessarily reflect those of this website or its editors.