Looking ahead to 2017 - how will the Trump presidency impact the fragile situation for Puerto Ricans?

In July 2015, as the 2016 US Presidential election was heating up, the Trump International Golf Club -- Puerto Rico filed for bankruptcy. 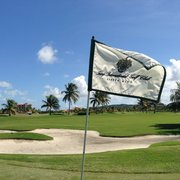 The resort, like the island itself, was a beautiful tropical paradise suffering from neglect and of little concern to Donald Trump, who didn't own the resort, but who licensed his name for a fee. The Trumps pulled out of the arrangement when the owner fell behind in paying fees and the family explained that the business climate in Puerto Rico was very difficult. A year later, as Puerto Rico was unable to repay its substantial debt to the US, Donald Trump thought that the US should not forgive their debts. Puerto Rico is an American territory and Puerto Ricans are American citizens, but Trump did not seem inclined to help that part of America to be "great again".

The verdant island, was self-sustaining for decades, with sugar its chief export until the 1950s. Then its economy dramatically changed as the US promoted industrialization by providing significant tax incentives that exempted tax on income originating in US territories. These tax incentives were fully revoked by 2006, and exacerbated the effects of the deepening recession in 2008 and led to poverty levels that rose year after year. Public services are unreliable; electric outages are common -- including an island-wide outage in September. The unemployment rate of 15% has led to an exodus of Puerto Ricans leaving for the United States.

Puerto Rico is now unable to repay its debts. Between 2000 and 2015 Puerto Rican debt rose from 63% of GDP to over 100% of GDP. Long reliant on the US for survival, Puerto Rico was helped in August 2016 when President Obama signed the Puerto Rican Oversight Management and Stability Act (PROMESA -- the Spanish word for promise).

PROMESA is a program that established a bankruptcy-like arrangement for restructuring and managing Puerto Rico's $80 billion debt burden. PROMESA's seven-member control board (4 Republicans and 3 Democrats named by President Obama) will work with Puerto Rico Governor Alejandro Padilla, to address methods to repair fiscal deficiencies and to protect Puerto Rico from bondholder law suits. A central issue addressed by US Treasury Secretary Lew and Secretary of Health and Human Services Burwell and by Governor Padilla is the need to expand the Affordable Care Act and Medicaid payment levels.

By cruel fortune, in 2016 Puerto Rico also became a hot zone for the Zika virus-- threatening the health of many inhabitants and the economy -- now reliant on tourism as agriculture, industry and trade failed. In January 2016, the CDC issued a travel warning for travelers to Puerto Rico to alert them about the Zika epidemic. Zika virus is transmitted primarily by mosquitoes, and thus is most dangerous in tropical climates. Zika stunned epidemiologists when they discovered that it is also transmitted from infected mother to infant, by sexual exposure, or through blood transfusion. The most troubling problem is that Zika can cause microcephaly (an unusually small brain or head) and other congenital abnormalities in infants of some women infected with Zika. The virus can also cause Guillain-Barre syndrome, with nerve and muscle weakness that often quickly progresses to paralysis.

Although many Americans have become infected due to travel to Zika endemic areas, in mainland US, only Florida (210 cases) and Texas (6 cases) have experienced transmission due to infected mosquitoes in the area. However, over 33,800 cases have been diagnosed in Puerto Rico; with over 2800 infections among pregnant women. Travel warnings have continued as there has been greater understanding of the risk of sexual transmission to pregnant women, including the concern that the virus can remain dormant in semen for months. So, not only should women who are pregnant or considering pregnancy avoid Puerto Rico, but men who travel to Puerto Rico are warned that regardless of whether they have any symptoms, they should wait at least 6 months before having sex without a condom or attempting conception. A tropical paradise that advises abstinence has a problem!

For those who live in Puerto Rico who wish to conceive, both partners are advised to be tested if they have any symptoms of Zika and to delay pregnancy until past the possible contagious stage (6 months for men; 8 weeks for women). For couples where neither are symptomatic, they should be counselled throughout pregnancy because infection can occur at any point.

As with many issues, when it comes to Zika prevention, diagnosis and care, Puerto Ricans share some benefits of US citizenry - - - but not all. Due to extreme poverty, half of the residents are covered by Medicaid, but as in the states, many providers don't take Medicaid insurance because of its poor coverage. Puerto Rican families who have a child affected by Zika are not covered by Social Security disability benefits. Nonprofit groups provide help, but there is a critical lack of services for most Puerto Ricans in need.

The US Health and Human Services have been active in Puerto Rico in 2016. The FDA has facilitated blood screening capability to safeguard the blood supply. As the CDC has developed and improved diagnostic test kits, they have assured they are widely available in Puerto Rico. As the epidemic began to flare, the CDC worked with the Puerto Rico Department of Health to focus on the need to assess contraception understanding and availability in the context of preventing Zika-related birth defects.

The assessment found that there were many physicians who did not address contraception and that there were inadequate contraceptive supplies available. They collectively established the Zika Contraceptive Access Network (Z-CAN) in Puerto Rico. Z-CAN was designed to train providers, increase the availability of contraceptives and to educate women about how contraception efforts were related to Zika. By the end of the year, among 150 physicians who provide obstetrical services in Puerto Rico only 105 (70%) had been trained. The CDC also provided technical guidance to provide mosquito control. While aerial spraying was adopted in Miami and other areas on the mainland, public opposition in Puerto Rico led to instead use mosquito traps.

It is not clear how much Zika has impacted Puerto Rico financially thus far or how much it will in the future. However, it is estimated between November 2015 and May 2016, long before the peak of the epidemic in October 2016, tourism officials estimated that Zika had cost the island $4.5million in lost revenue. Meetings, sporting events, weddings and family vacations were cancelled.

PROMESA has a challenge ahead as it works to restructure the Puerto Rican economy. It is still early to know how PROMESA or other actions will address the growing economic needs due to Zika. The Kaiser Foundation expresses this worry: "While the law represents a first step toward economic recovery, it does not address the critical issues facing Puerto Rico's health care system, including the impending expiration of ACA funding, the limits imposed by the capped Medicaid financing structure, or the mounting cases and future consequences of Zika on the island."

All these issues -- US election results, Puerto Rico's relationship with the US, Zika (and other epidemics) are all one topic. Puerto Rico's past and future is linked to the US; it's residents are US citizens; its epidemics are US epidemics and its financial challenges in caring for disabled children are US challenges.

Richard R Scott
Dr. Richard Scott, is President of the Center for Social Policy Research, examining the context of political events and issues to show their implications for social policy and the advancement of a progressive social (more...)

Related Topic(s): Funding; Health; Zika Virus, Add Tags
Add to My Group(s)
Go To Commenting
The views expressed herein are the sole responsibility of the author and do not necessarily reflect those of this website or its editors.

Is Trump A Cunning Fascist or Simply Mentally Ill?

Who Hillary Should Have Fought and Democrats Must Now Fight