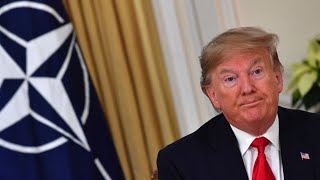 The three smartest words that Donald Trump uttered during his presidential campaign are "NATO is obsolete." His adversary, Hillary Clinton, retorted that NATO was "the strongest military alliance in the history of the world." Now that Trump has been in power, the White House parrots the same worn line that NATO is "the most successful Alliance in history, guaranteeing the security, prosperity, and freedom of its members." But Trump was right the first time around: Rather than being a strong alliance with a clear purpose, this 70-year-old organization that is meeting in London on December 4 is a stale military holdover from the Cold War days that should have gracefully retired many years ago.

NATO was originally founded by the United States and 11 other Western nations as an attempt to curb the rise of communism in 1949. Six years later, Communist nations founded the Warsaw Pact and through these two multilateral institutions, the entire globe became a Cold War battleground. When the USSR collapsed in 1991, the Warsaw Pact disbanded but NATO expanded, growing from its original 12 members to 29 member countries. North Macedonia, set to join next year, will bring the number to 30. NATO has also expanded well beyond the North Atlantic, adding a partnership with Colombia in 2017. Donald Trump recently suggested that Brazil could one day become a full member.

NATO's post-Cold War expansion toward Russia's borders, despite earlier promises not to move eastward, has led to rising tensions between Western powers and Russia, including multiple close calls between military forces. It has also contributed to a new arms race, including upgrades in nuclear arsenals, and the largest NATO "war games" since the Cold War.

While claiming to "preserve peace," NATO has a history of bombing civilians and committing war crimes. In 1999, NATO engaged in military operations without UN approval in Yugoslavia. Its illegal airstrikes during the Kosovo War left hundreds of civilians dead. And far from the "North Atlantic," NATO joined the United States in invading Afghanistan in 2001, where it is still bogged down two decades later. In 2011, NATO forces illegally invaded Libya, creating a failed state that caused masses of people to flee. Rather than take responsibility for these refugees, NATO countries have turned back desperate migrants on the Mediterranean Sea, letting thousands die.

In London, NATO wants to show it is ready to fight new wars. It will showcase its readiness initiative the ability to deploy 30 battalions by land, 30 air squadrons and 30 naval vessels in just 30 days, and to confront future threats from China and Russia, including with hypersonic missiles and cyberwarfare. But far from being a lean, mean war machine, NATO is actually riddled with divisions and contradictions. Here are some of them:

* French President Emmanuel Macron questions the U.S. commitment to fight for Europe, has called NATO "brain dead" and has proposed a European Army under the nuclear umbrella of France.

* Trump wants NATO to push back against China's growing influence, including the use of Chinese companies for the construction of 5G mobile networks -- something many NATO countries are unwilling to do.

* Is Russia really NATO's adversary? France's Macron has reached out to Russia, inviting Putin to discuss ways in which the European Union can put the Crimean invasion behind it. Donald Trump has publicly attacked Germany over its Nord Stream 2 project to pipe in Russian gas, but a recent German poll saw 66 percent wanting closer ties with Russia.

* The UK has bigger problems. Britain has been convulsed over the Brexit conflict and is holding contentious national election on December 12. British Prime Minister Boris Johnson, knowing that Trump is wildly unpopular, is reluctant to be seen as close to him. Also, Johnson's major contender, Jeremy Corbyn, is a reluctant supporter of NATO. While his Labour Party is committed to NATO, over his career as an anti-war champion, Corbyn has called NATO "a danger to world peace and a danger to world security." The last time Britain hosted NATO leaders in 2014, Corbyn told an anti-NATO rally that the end of the Cold War "should have been the time for NATO to shut up shop, give up, go home and go away."

* A further complication is Scotland, which is home to a very unpopular Trident nuclear submarine base as part of NATO's nuclear deterrent. A new Labour government would need the support of the Scottish National Party. But its leader, Nicola Sturgeon, insists that a precondition for her party's support is a commitment to close the base.

* Europeans can't stand Trump (a recent poll found he is trusted by only 4 percent of Europeans!) and their leaders can't rely on him. Allied leaders learn of presidential decisions that affect their interests via Twitter. The lack of coordination was clear in October, when Trump ignored NATO allies when he ordered U.S. special forces out of northern Syria, where they had been operating alongside French and British commandos against Islamic State militants.

* The US unreliability has led the European Commission to draw up plans for a European "defense union" that will coordinate military spending and procurement. The next step may be to coordinate military actions separate from NATO. The Pentagon has complained about EU countries purchasing military equipment from each other instead of from the United States, and has called this defense union "a dramatic reversal of the last three decades of increased integration of the transatlantic defense sector."

* Do Americans really want to go to war for Estonia? Article 5 of the Treaty states that an attack against one member "shall be considered an attack against them all," meaning that the treaty obligates the US to go to war on behalf of 28 nations -- something most likely opposed by war-weary Americans who want a less aggressive foreign policy that focuses on peace, diplomacy, and economic engagement instead of military force.

Related Topic(s): Allies; NATO; Trump And Nato, Add Tags
Add to My Group(s)
Go To Commenting
The views expressed herein are the sole responsibility of the author and do not necessarily reflect those of this website or its editors.