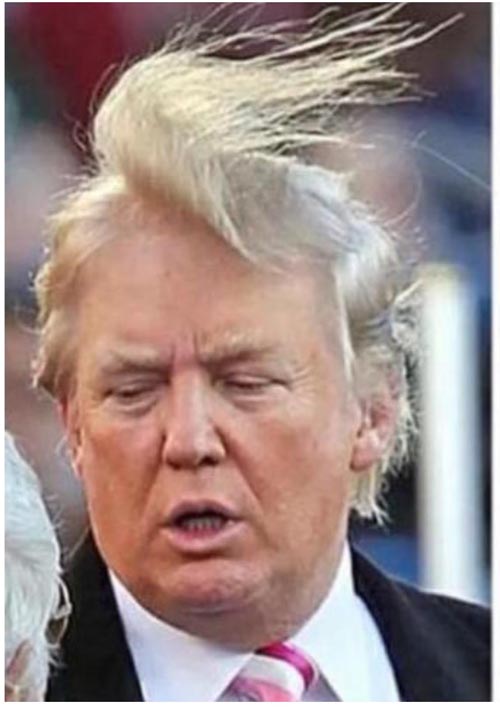 (Image by Martha Rosenberg)   Details   DMCA
In 2018, President Trump's doctor disclosed that the president takes finasteride, a drug marketed as Propecia to treat male pattern baldness. While it is tempting to make jokes about Trump's hair and even the sexual side effects that accompany the drug, there are many disturbing adverse effects that probably no men should risk in a hair drug.

In the 23 years since Propecia was approved to treat hair loss from male pattern baldness, side effects have been so concerning, the term post-finasteride syndrome (PFS) has been coined and hundreds of lawsuits have been brought. In addition to its sexual side effects, the drug is linked to serious conditions and has effects cognition and mental states.

A 2014 study in the Journal of Steroid Biochemistry and Molecular Biology finds that "altered levels of neuroactive steroids, associated with depression symptoms, are present in androgenic alopecia patients even after discontinuation of the finasteride treatment."

In 2010 depression was added to labels as a side effect and patients were warned that finasteride could have an effect on prostate-specific antigen (PSA) tests . In 2011, the label conceded that sexual dysfunction could continue"after stopping the medication" and that finasteride could pose a "risk of high-grade prostate cancer." In 2012, a warning was added that "other urological conditions" should be considered before taking finasteride. Soon, "male breast cancer" was added under "postmarketing experience." Then the side effect of angioedema was added.

There are many Propecia horror stories on sites founded to help people with side effects and those involved in litigation. In 2011, a mother told CBS news she blamed her 22-year-old son's suicide on Propecia and Men's Journal ran a report called "The (Not So Hard) Truth About Hair Loss Drugs."

Sexual Side Effects But A Full Head Of Hair

Finasteride inhibits a steroid responsible for converting testosterone into 5α-dihydrotestosterone (DHT) the hormone that tells hair follicles on the scalp to stop producing hair. Years before Propecia was approved to grow hair, finasteride was being used in drugs like Proscar, Avodart and Jalyn to treat an enlarged prostate gland (benign prostatic hyperplasia). Like Viagra, which began as a blood pressure med, or the eyelash-growing drug Latisse, which began as a glaucoma drug, finasteride's hair restoration abilities were a fortuitous side effect.

Related Topic(s): Trump; Trump Anger; Trump Anxiety; Trump Apologists; Trump Approval Ratings; Trump Mental Health; Trump Mental State, Add Tags
Add to My Group(s)
Go To Commenting
The views expressed herein are the sole responsibility of the author and do not necessarily reflect those of this website or its editors.