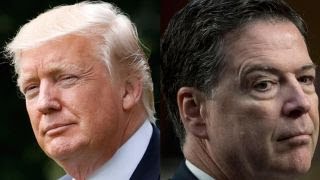 Even before the Justice Department inspector general's report on former FBI director James Comey was released on Thursday afternoon, Donald Trump initiated the inevitable tweet storm, hoping to use this development as yet another distraction from the Trump-Russia scandal.

The Comey report, issued by Inspector General Michael Horowitz, examined Comey's handling of the FBI's Hillary Clinton email investigation and reached an obvious conclusion: Comey deviated from Justice Department and FBI procedures by publicly announcing his recommendation in July 2016 that she not be prosecuted (while still criticizing her for how she handled her email at the State Department) and by informing Congress shortly before the election that the investigation was being revived. The IG noted, "While we did not find that these decisions were the result of political bias on Comey's part, we nevertheless concluded that by departing so clearly and dramatically from FBI and department norms, the decisions negatively impacted the perception of the FBI and the Department as fair administrators of justice."

In other words, the IG report confirmed reality. After all, Comey acknowledges he didn't stick to Justice Department S.O.P. -- he, of course, has defended these fateful decisions -- and anyone who remembers those two episodes know that partisans excoriated Comey for acting in a political manner. (Democrats slammed him for taking the unprecedented step of harshly chastising a target not being indicted and for hastily notifying GOP leaders on Capitol Hill of a revived inquiry that produced nothing new. Republicans blamed him for, essentially, not locking her up.)

The report found that the FBI's and Justice Department's conclusions that the Clinton email case did not warrant prosecution were indeed legitimate. But the IG did harshly rebuke Comey for flouting Justice Department rules and for making a "serious error of judgment" when he notified Congress on his own that the bureau was reopening the Clinton email investigation. The report said it was "extraordinary that Comey assessed that it was best" for him not to speak with the attorney general or her deputy about his decision. The IG called his decision to hold that July press conference on the Clinton case without consulting with the attorney general "insubordinate." The report pounds Comey for placing himself above the rules and assuming authority he did not possess.

Ahead of the official release of the report, Trump began tweeting out his usual denunciation of the Trump-Russia investigation headed by special counsel Robert Mueller, who inherited the probe after Trump fired Comey. Trump insisted yet again that it was a "witch hunt" and that there was "No Collusion and No Obstruction of the fabricated No Crime."

David Corn is  Mother Jones ' Washington bureau chief. For more of his stories,  click here . He's also  on  Twitter  and  Facebook .  RSS  |  TWITTER  David is (more...)
Related Topic(s): Comey Firing; Cover-ups; Email; FBI; Investigation; Trump Cruelty; Us-elections, Add Tags
Add to My Group(s)
Go To Commenting
The views expressed herein are the sole responsibility of the author and do not necessarily reflect those of this website or its editors.