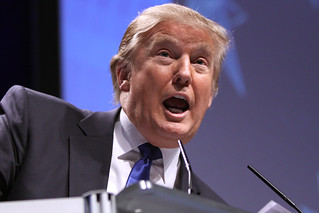 The billionaire big-mouth US presidential candidate Donald Trump appears to be the favorite contender for the White House among ordinary Russians, according to some polls.

His appeal abroad is due to various factors. Trump has a rakish persona whose iconoclasm can at times seem amusing. He has clearly upset the US political establishment with his politically incorrect fiery talk, including members of his own Republican party.

Trump has also said things that appear to be progressively radical. In particular, he has voiced favorable comments in the past about Russian President Vladimir Putin, and has vowed to improve foreign relations between Washington and Moscow. He also slammed the US military alliance NATO as being obsolete.

The property magnate and former reality-TV star has therefore understandably garnered positive interest among Russian citizens. Trump may have said some obnoxious things against immigrants and Muslims, but on the other hand some of his views appear to set him refreshingly apart from conventional Washington politics, which invariably disparage Russia as a global threat.

Could The Donald come up trumps to thaw frosty relations between the US and Russia?

The trouble with Trump, who as of last week has become the Republican's presidential presumptive nominee, is that he can't be trusted. As a former business associate said of him to the Washington Post, Trump will saying anything if he thinks it will clinch a deal. In other words, the would-be president is a consummate self-serving player.

This week has shown Trump making a series of lightning-fast U-turns and rhetorical pirouettes almost befitting the Bolshoi Ballet.

On London's newly elected mayor, Sadiq Khan, Trump said he would make an "exception" to his proposed temporary ban on Muslims entering the US by allowing the British politician a visitor visa.

Khan won a stunning electoral victory last week when he became the first Muslim mayor of the British capital -- one of the most prestigious cities of the world. The working-class son of an immigrant busman later said that he would like to visit the US to liaise with American mayors on municipal projects, but that he feared he would not be permitted entry if Trump became president in the November election to the White House, because of his "religious faith."

Trump had previously sparked international furor with his proposal to ban all Muslims entering the US -- following the terror attacks last year in Paris which were committed by Al Qaeda-linked jihadists.

In response to the London mayor's comments, Trump had to make an embarrassing partial retraction of his outlandish Muslim ban. He congratulated Khan on winning the London mayorship and said there were "exceptions to every rule."

That was not the only slippery stroke by The Donald in the space of a few days. He also quickly walked back comments that he would increase taxes on the super-rich and that he supported increasing the minimum wage for low-paid workers. He subsequently said he wouldn't increase taxes on the wealthy, and that he did not support a federal minimum wage, after appearing to say the opposite on both counts only days earlier.

Trump's spinning and counter-spinning was so agile and contorted that it's not clear what his exact policy position is on these economic matters.

The same goes for his foreign policy. Trump may talk about NATO allies having to fend for themselves in the future and of withdrawing American military protection from overseas deployment, however, he has also warned in contradictory fashion that he will escalate US militarism in the world.

Essentially, Trump's views seem to be ad hoc and contrived to gain votes. In short, he is a demagogue, not someone who has a principled manifesto for "making America great." Becoming CEO in the White House is perhaps his biggest business venture to date, and he appears to be willing to pull out all the stops in order to clinch that deal.

This leads to a mercurial mix of contradictory policies based on expedience and self-serving ambition.

But it also illustrates how Trump has a superficial understanding of how American power really works in the world. Trump may appeal to some voters by saying that he will get NATO allies and other partners to pay more. The assumption being that America is a benevolent chivalrous protector, when the reality is that Washington uses NATO as a vehicle for imposing its hegemony on the rest of the world. There is no way that Trump will get the US to withdraw from NATO and its overseas garrisons because they are crucial to US power projection.

To a degree, the rise of Trump can be seen, indirectly, with some satisfaction. The self-financed mogul, who made his fortune from wheeler-dealer property business, is an epitome of failed American capitalism and the two-party political charade under Republicans and Democrats.

Related Topic(s): Donald Trump; Mockery; Russian Foreign Policy; Trump Campaign; Vladimir Putin, Add Tags
Add to My Group(s)
Go To Commenting
The views expressed herein are the sole responsibility of the author and do not necessarily reflect those of this website or its editors.