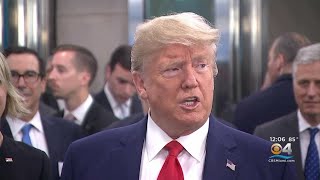 Trump has already committed the crime of aggression against Iran, and he is now threatening to commit a war crime if he carries through on his January 4 promise to target Iran's cultural sites. The United States has violated the United Nations Charter's prohibition on the use of military force. This is the time to raise our voices and demand that our congressional representatives put a halt to Trump's illegal war-making.

It should be clear to any legal analyst that Donald Trump's catastrophic decision to order the illegal assassination of Iranian Maj. Gen. Qassim Suleimani and Iraqi senior military leader Abu Mahdi al-Muhandis constituted the crime of aggression, and violated both the United Nations Charter and the U.S. War Powers Resolution.

The January 2 drone attacks that killed Suleimani, al-Muhandis and al-Muhandis's public relations chief were the deadliest escalation of Trump's "maximum pressure" campaign against Iran since his May 18, 2018, withdrawal from the Iran nuclear deal. In May 2019, one year after Trump pulled out of the agreement, Secretary of State Mike Pompeo claimed U.S. intelligence had concluded that Iranian-sponsored attacks on U.S. military personnel were "imminent." The New York Times said the administration made that allegation "without evidence" to support it.

Now, seven months later, Team Trump is again invoking the threat of an "imminent" Iranian attack to justify its illegal assassination of Suleimani, and once again, it cites no evidence to substantiate such a threat.

The Drone Assassinations Were Not Conducted in Self-Defense

Trump's drone killings did not constitute lawful self-defense. Article 51 of the UN Charter establishes the inherent right of self-defense in response to an armed attack by another state. Suleimani was a national of Iran. Neither Iran nor Iraq, where the assassination occurred, had mounted an armed attack on the United States before the fatal U.S. drone strikes.

After a rocket attack in Kirkuk resulted in the death of a U.S. mercenary, the United States retaliated by launching several airstrikes in Iraq and Syria that killed 24 members of the Iranian-backed Iraqi militia Kataib Hezbollah. In response, members of that militia and their supporters tried to storm the U.S. embassy in Baghdad but there were no casualties.

"The attacks on a US military base in Iraq allegedly by Iraqi-based militias, who were Iraqi non-state actors, do not qualify as an armed attack on the US by Iran," the International Association of Democratic Lawyers (IADL) said in a statement. "Neither does the action by Iraqis who entered the US Embassy in Baghdad, injuring and killing no one, in response to US strikes against these militias (which killed 25 people and injured 55 more) amount to an armed attack by Iran against the US," the IADL added.

Moreover, Agnès Callamard, UN special rapporteur on extrajudicial, summary or arbitrary executions, tweeted that the drone killings were "most [likely] unlawful and violate international human rights law." Callamard said, "Outside the context of active hostilities, the use of drones or other means for targeted killing is almost never likely to be legal." She wrote that "intentionally lethal or potentially lethal force can only be used where strictly necessary to protect against an imminent threat to life." Thus, Callamard said, the United States would need to demonstrate that the target "constituted an imminent threat to others." Suleimani's "past involvement in 'terrorist' attacks is not sufficient to make his targeting for killing lawful," she added. The anticipatory self-defense Trump claimed during his press conference is not likely legal, according to Callamard, since the necessity for the use of self-defense must be "instant, overwhelming, and leaving no choice of means, and no moment of deliberation."

Indeed, New York Times reporter Rukmini Callimachi tweeted that "two US officials who had intelligence briefings after the strike on Suleimani" told her that "the evidence suggesting there was to be an imminent attack on American targets is 'razor thin.'"

Likewise, a U.S. government official informed The New York Times that the new intelligence indicated that December 30 was "a normal Monday in the Middle East" and Suleimani's travels constituted "business as usual." The official said the intelligence was "thin" and Suleimani's attack was "not imminent" because it had not been approved by Ayatollah Ali Khamenei.

The Assassinations Were Not Authorized by the Security Council

Nor were the drone strikes authorized by the Security Council. The Council has primary responsibility to maintain international peace and security under the UN Charter. Article 39 states, "The Security Council shall determine the existence of any threat to the peace, breach of the peace, or act of aggression" and decide whether to authorize the use of military force under Article 42.