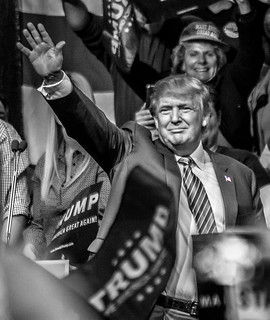 Donald Trump in Reno, Nevada
(Image by Darron Birgenheier)   Details   DMCA
Remember when the nation (and the world) got its first taste of candidate Trump's ugly racism when he flatly declared of Mexican immigrants that "they're rapists?" Remember later, when he expressed his great pride at being endorsed by Mike Tyson, an actual convicted rapist? Apparently, the imaginary rapes-to-be by undocumented immigrants are of more concern than actual rapes.


Rape is been something of an obsession in the Republican party of late. Who could forget the repeated stumbles by Republican candidates who couldn't help themselves on the subject of rape? Seeming to forget that women vote, Republican men fell over each other to cast doubt on the veracity of rape victims who were impregnated against their will. Rape provided an apparently irresistible opportunity to remind women of their function as instruments of patriarchy, rather than as human beings. But Trump's schizoid references to rape are a perfect illustration of how rape has been a convenient way to hurt both marginalized minorities, and women.

Rape has, of course, infamously been used to paint men of color - both black and Latino- as dangerous and deviant. Racism against Mexican immigrants was a major impetus behind the prohibition of cannabis. Of course, in this scenario, the violation is not so much women as human beings, but women as property of white men.

We tend to think of this use of rape as from an earlier time. This belief is part of the underpinning of campaigns to believe rape victims. Questions about: "what was she wearing" why was she alone". did she fight back hard enough" and how she managed to get pregnant"" are part of this more modern use of rape. Civil rights and civil liberties advocates are in a bind if they have to fight both wars at once, however. Each set of prejudices hurts either the alleged perpetrator or the alleged victim.

It's striking how easily Trump slides from one collective smear to another. When smearing Mexican immigrants, the important point is the "rapist" label, not any actual victims. When it came to the Tyson case, however, Trump saw fit to blame the alleged victim.

To be fair, some - including Tyson, and Harvard lawyer Alan Dershowitz - have claimed that he was innocent of the crime. However, the important point as far as Trump is concerned, is that it's more important to use rape both to tarnish Mexican immigrants and women, than it is to be concerned about the actual crime of rape.

Perhaps the most revealing Trump comment about the Tyson endorsement - as well as the endorsement from coach Bobby Knight (also alleged to have a violent history) - is his pride at being endorsed by "tough guys." Along with his encouragement of violence at his rallies, and his gleeful promises to torture suspects and "bomb the s---t out of ISIS," Trump's pride in these latest endorsements would appear to be more than anything else, a continuation of the major theme of his candidacy: a celebration of violence.