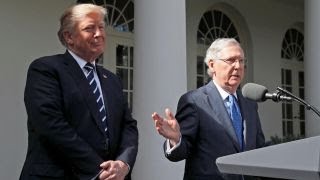 The Republican tax cuts passed last year were supposed to usher in a new wave of prosperity. The promise was an investment-led economic boom, which would lead to higher wages and income across the board.

The tax cut would "pay for itself" as this surge in growth would lead to such a burst of new tax revenue that returns would be the same or even higher, in spite of the lower tax rates. It is still a bit less than a year since Congress passed the tax bill, but it is already pretty clear that things are not going as promised.

First, the claims about a surge in tax revenue lowering the budget deficit do not seem to be coming true. The deficit for fiscal year 2018 ended up being $779 billion or 3.7 percent of GDP. The Trump administration had projected a deficit of $440 billion or 2.2 percent of GDP. Almost the entire shortfall was due to lower than projected revenue, not a federal government spending spree.

But the story that we really should be focused on -- if we're assessing the tax cuts -- is investment. The centerpiece of the tax cut was a huge cut in the corporate income tax rate from 35 percent to 21 percent.

Most immediately, this part of the tax cut was a huge handout to the country's wealthiest people, who own the vast majority of stock. Companies have not been shy about announcing big share buybacks or dividends following the tax cut.

Trump and the Republicans insisted that the tax cut would give companies more incentive to invest. Their projections assumed an increase in investment of around 30 percent over baseline growth. The long-term success of the tax cut depends on this surge.

Unfortunately, the data don't agree with the Trump administration's forecasts. Investment is up modestly. In the first three-quarters of 2018 investment was 6.7 percent higher than in the same period last year. By comparison, investment rose by 6.9 percent in 2014 and increased at a 9.1 percent annual rate from 2010 to 2012.

Much of the growth we have seen this year is not from tax cuts but from higher world energy prices spurring a boom in oil and gas drilling. If we pull out energy-related sectors, the rise in investment would be even less.

There is also no evidence of the promised investment boom in any of the various surveys showing business plans. For example, the Commerce Department reported last week that new orders for non-defense capital goods, the largest component of investment, were up by less than 1.0 percent from their year-ago levels.

One place where the tax cut seems to be having an impact is on the housing market. Most measures of construction and sales are now showing substantial slowing. In fact, the inventory of unsold new houses is now more than seven months of sales. The inventory-to-sales ratio hasn't been this high since the start of 2011.

The weakness in the housing market is not a surprise. It follows a jump in interest rates that has pushed the 30-year mortgage rate up by roughly a percentage point. This was an entirely predictable result of the tax cuts.

Higher interest rates have also helped to push up the value of the dollar and rapidly increase the trade deficit. As a result, Donald Trump's trade war is in rapid retreat. It is important to note the role of the Federal Reserve Board here. A large part of the story in higher interest rates is that the Fed has accelerated its path of rate hikes as a result of the tax cut. While this was predictable and predicted, it is a policy choice.

Ostensibly, the Fed fears that more rapid growth in an economy near full employment will spur an inflationary spiral. Therefore, they argue it is necessary to raise rates to head off this spiral.

Dr. Dean Baker is a macroeconomist and Co-Director of the Center for Economic and Policy Research in Washington, D.C. He previously worked as a senior economist at the Economic Policy Institute and an assistant professor at Bucknell University. (more...)
Related Topic(s): Prosperity; Trump Broken Promises; Trump Tax Bill; Trump Tax-cut Scam, Add Tags
Add to My Group(s)
Go To Commenting
The views expressed herein are the sole responsibility of the author and do not necessarily reflect those of this website or its editors.