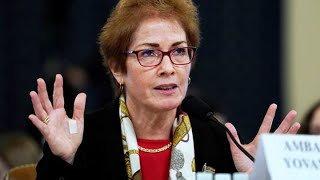 The US media are being way too protective of President Donald Trump in reporting on his Ukraine scandal.

The Don(ald) grew up in New York City and is known to have had his share of dealings with mobsters there in the course of his scandal-plagued real estate career, thanks to well-documented Mafia control over key parts of the construction industry in the city, to his affinity for the casino business (another mob-infested industry), and to Trump's willingness to deal with them. And it appears he has adopted Cosa Nostra lingo along the way.

In a video/audio tape of a conversation the president had with his personal lawyer Rudy Giuliani and two of Giuliani's business associates, Lev Parnas and Igor Fruman, concerning the US ambassador to Ukraine Marie Yovanovitch, recorded during a dinner event, Trump, who was trying to have Yovanovitch ousted and replaced as ambassador, can be heard yelling to Giuliani, Parnas and Fruman, "Get rid of her! Get her out tomorrow. I don't care. Get her out tomorrow. Take her out. OK? Do it!"

Now, it's easy for the president (who against all evidence claims not to know Parnas and Furman) to say, "Oh, I was just telling them I wanted her fired," but there is a problem with that benign explanation. Giuliani has no government position. He cannot fire an ambassador. Neither could either Fruman or Parnas. Only the State Department and Secretary Mike Pompeo would have the power to do that, on the president's orders. So telling them to "get rid of" the ambassador is pointless...unless he meant he wanted her removal done in a different, more direct and more permanent, way.

What we know Trump was doing, from a series of witnesses' testimony at the impeachment hearings in the House Intelligence and House Judiciary Committees, was running a private operation under Giuliani's direction, to try and dig up dirt on and to kick-start a Ukraine government investigation into former Vice President Joe Biden and his Ukrainian energy company paid-consultant son Hunter. As part of that defamation project, Trump wanted Yovanovitch (a career diplomat who over 33 years had worked in the State Department under six presidents), removed as ambassador because she was deemed insufficiently supportive of that effort.

The problem is that it certainly could sound to the ear of one familiar with both Hollywood crime movies, and also with New York mob lingo (I spent 12 years living in New York and reading the columns of the great journalist Jimmy Breslin, who personally knew plenty of local mobsters and wrote about them regularly in Daily News columns and in his novels) as if the president were not just trying to have Yovanovitch fired -- something he himself could easily have ordered -- but rather was asking to have her rubbed out, whacked, taken for a one-way ride.

Now maybe the president was just playing tough guy in banter with pal Giuliani and friends. But"

Related Topic(s): Trump Vindictiveness; Trumpism; Ukraine, Add Tags
Add to My Group(s)
Go To Commenting
The views expressed herein are the sole responsibility of the author and do not necessarily reflect those of this website or its editors.