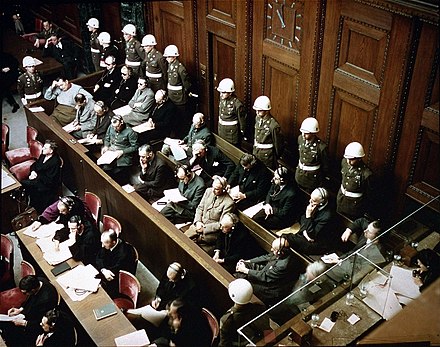 Defendants in the dock at nuremberg trials.
(Image by (From Wikimedia) Raymond D’Addario, Author: Raymond D’Addario)   Details   Source   DMCA
On November 15, US president Donald Trump pardoned two US Army officers accused of war crimes (one convicted, the other awaiting trial ).

Trump also re-promoted US Navy SEAL Edward Gallagher from Petty Officer First Class to Chief Petty Officer. Gallagher was convicted of a minor war crime (posing for a photo with a corpse) after he was accused of murdering the victim, but acquitted when a fellow sailor swung a deal for immunity, then reversed his testimony and claimed responsibility for the murder.

When he learned that the Navy intended to remove Gallagher from duty as a SEAL, Trump intervened again, by tweet -- "The Navy will NOT be taking away Warfighter and Navy Seal Eddie Gallagher's Trident Pin" -- and had Richard Spencer fired as Secretary of the Navy for not treating the tweet as an order.

There are plenty of reasons to criticize Trump's actions, but I only have room in this column for one of those reasons:

He has effectively sentenced future US soldiers, sailors, airmen and Marines to battlefield execution.

Gallagher's crimes were reported by his SEAL comrades.

He was investigated and charged with those crimes by the Navy itself, which has morale and publicity incentives to only go after "the worst of the worst" for actions on the battlefield.

He was tried and convicted by a jury of his military peers in a process that actually offers more protections for defendants than the civilian justice system (for example, an enlisted defendant can demand that at least one third of the jury be enlisted personnel rather than officers).

When Trump short-circuited that process first with the pardon, then with the re-promotion, and finally with the demand that Gallagher be allowed to return to his former unit he very loudly sent a message to every member of the US armed forces:

"When you have a bad actor in your midst, take care of the problem yourselves. If you go through the proper channels, that bad actor will get off with little or no punishment and be sent right back to your ranks."

Above and beyond the damage done to their direct victims, war criminals endanger their fellow troops. They make enemies out of people who might otherwise remain neutral or even friendly. They motivate those enemies to fight harder and to seek harsh vengeance.

If the military justice system doesn't charge, try, and punish people whose crimes endanger their comrades because the president panders for votes from "support the troops" types, the (unsupported) troops will deal with such matters on the spot.

We who are veterans can attest to "blanket parties" for serial screw-ups, "dry showers" with scrub brushes for guys who don't maintain personal hygiene in close living quarters, and other "light" punishments for minor offenses.

For endangering the lives of comrades, military vigilantism extends all the way to summary execution. In Vietnam, it was referred to as "fragging."

Related Topic(s): Trump; Trump Pardoning War Criminals, Add Tags
Add to My Group(s)
Go To Commenting
The views expressed herein are the sole responsibility of the author and do not necessarily reflect those of this website or its editors.