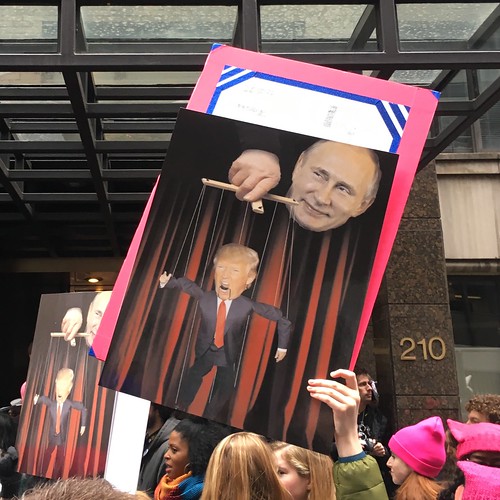 I have avoided getting caught up in what can only be described as the insanity gripping the US media and political elite since even before Trump's astounding victory in 2016 -- the claim that poor, weak Russia somehow orchestrated the defeat of Hillary Clinton and the election of the clownish, loose cannon Donald Trump. 'Ridiculous,' I laughed. As the drumbeat continued into the fourth year, out of curiosity, I decided I should have a look.

The biggest noise was the indictment of a Russophobe anti-Trumper (Trump "a soulless ginger orangutan") whistleblower Reality Winner, in 2018, whose claim of Trump-Russia conspiracy was bogus but who was imprisoned for her 'courageous' blowhardiness anyway. (US justice is as weird as American names like 'Reality Winner'. She exposed " nothing, and was sentenced to five years and three months in prison as part of that marvel of US 'justice' a plea bargain.)

I watched a video interviewing black activist Andrew (unintelligible) on MSNBC in April 2019, with the accompanying article, "Russian documents reveal desire to sow racial discord and violence in the U.S.", about a Facebook troll who supposedly originated in the now legendary Internet Research Agency, "the St. Petersburg-based troll farm that played a key role in the 2016 Russian meddling campaign." Naughty, naughty.

Why would Russians do this (if the story is legit)? And does it matter? The answer to the second question is 'no'. The first requires remembering just what role the US has played in Russian politics. The role is outsized and Russia barely survived.

The interference, of course, goes back a century, with the US intervention in the Russia of 1917, as part of an alliance of the imperial powers to destroy the revolution and put in place a nice, subservient puppet government that would end any thought of communism, the new enemy of the imperialists.

But this conspiracy did not end with the communist collapse in 1991 (which also was very much brought about by US efforts). The most outrageous interference was propping up the addled, drunken Yeltsin and his "Democratic Russia", both in his destruction of the first 'democratic' parliament in 1993, and ensuring his reelection in 1996. Yeltsin spent from $700 million to $2.5 billion. Guess who filled his coffers (and helped at the ballot boxes)?

This, despite overwhelming opposition by the Russian people. It's very hard to buck the imperial hegemon (just ask the Venezuelans and Iranians). Perhaps Russia never had a chance, but the interference did not stop there.

Yeltsin handed power to the only credible person in his entourage, Vladimir Putin, who survived the wreckage that Yeltsin bequeathed him, and after two terms, relinquished his hold on power according to the constitution. The US did not like this tsar-like figure, fuming at what was seen as a betrayal of Russia's 'new' democracy. Which, remember, Yeltsin reduced to rubble in 1993 and put the finishing touch on in 1996.

Putin left office, finishing his two terms. True, Putin had stuck by the constitution, and power devolved in a real show of democracy, into a more palatable Medvedev. But he was still smart, patriotic Putin, now acting as prime minister. Not what the US ordered. Still, the arrival of the friendly, meek Dmitri Medvedev as president was a good sign. US democracy-promoting NGOs proliferated. (National Democratic Institute, National Endowment for Democracy, Soros's Open Society, USAID, etc.)

As National Security Council adviser on Russia, Michael McFaul advised Obama to mark the transition from Putin to Medvedev with a metaphorical 'reset' button in 2009, hoping to lure Medvedev into breaking from Putin and bringing Russia back into the US fold as a NATO groupie. As a Russia expert, McFaul provided the translation for the word 'reset' as peregruzka.

When secretary of state Clinton presented an actual button marked 'reset/peregruzka' to Foreign Minister Sergey Lavrov, he pointed out that peregruzka did not mean reset, but rather overload, referring to putting too much power through an electrical system, leading to blown fuses, or even a fire. Clinton tittered but failed to see the irony that this was precisely what the US intend.

When Putin came back in 2012 to begin another two terms, McFaul cried, 'Not fair!' Despite his dubious command of the subtleties of the Russian language, he was chosen by Obama as his ambassador to Russia (2012--14), to continue his conspiring in the heart of the beast.

The 'reset' 'overload' fell flat. Medvedev had not betrayed Russia. There was indeed a series of blown fuses under McFaul's watch, but thankfully no conflagration. Putin has kept a modest check on US belligerence ever since. Like a spoiled child, McFaul kept/ keeps screaming 'foul!'.

A moment full of irony building up to the 'reset' fiasco was Obama's 2008 Nobel Peace Prize, the selection committee hoping to influence US politics for the better, by giving Obama a boost against his warmongers. The first 'black' president would deliver his people (and the world) from the military industrial complex, end the US illegal wars in Afghanistan and Iraq, support the UN, etc. We all know how that ended. How about a Nobel Prize for the most civilians killed by drones?

Of course, all these 'international' organs (UN, Nobel not to mention NGOs) despise Putin, though his unflinching approach to Russian-US relations has been the key factor in holding Russia together and maintaining world order. If anyone deserves the Nobel prize, it is Putin (which he'll get only when Hell freezes over).

Related Topic(s): Deep State; Democrats; Impeach; Medvedev; Obama; Russiagate; Trolls; Trump; Trump And Putin, Add Tags
Add to My Group(s)
Go To Commenting
The views expressed herein are the sole responsibility of the author and do not necessarily reflect those of this website or its editors.