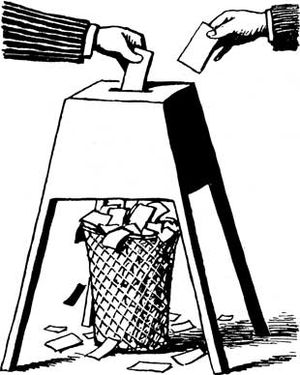 The Republican party has not legitimately won the White House since Dwight D. Eisenhower in the 1950s.

Even though November 2018's mid-term election results were historic, it does not mean the GOP has forgotten how to cheat to win.

Yet there is one area the Grand Old Party has identified as the country's oft-ignored Achilles' heel--voting.

Eleven years ago the Republican party was licking its wounds after the country elected its first African American president and Democrats controlled both houses of Congress.

So Republicans came up with a strategy: concentrate on 16 states and gerrymander them so badly Democrats have little to no mathematical chance of winning in the 2010 mid-term elections.

But there was another, more insidious strategy.

Republicans knew they couldn't come right out and criminalize voting, so they devised ways to make casting ballots harder, more inconvenient, and frustrating, hoping people would stay home rather than go through the rigmarole to practice their civic duty.

That's when the term "voter fraud" started circulating around right-wing media. Simply accuse random people (mostly immigrants) of voting illegally, and enough "patriots" would rise up in an altruistic fervor to fortify the most fundamental of democratic institutions against those who seek to denigrate it.

Voter fraud, however, is a myth.

Voter suppression is very much alive in America, and Republican states are setting a record for purging voting roles.

Clark is reported to have said:

"Traditionally it's always been Republicans suppressing votes in places. Let's start protecting our voters. We know where they are... Let's start playing offense a little bit. That's what you're going to see in 2020. It's going to be a much bigger program, a much more aggressive program, a much better-funded program."

Related Topic(s): 2013; Cheating; Democrats; Election; Purging; Republican; Rights; Trump; Voting, Add Tags
Add to My Group(s)
Go To Commenting
The views expressed herein are the sole responsibility of the author and do not necessarily reflect those of this website or its editors.