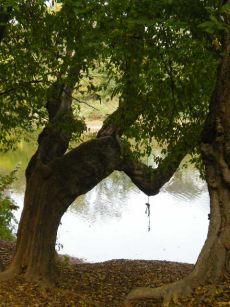 Lest We Forget
(Image by Marcello Rollando)   Details   DMCA
The moment we acquiesce to labeling then ignoring, hearing then forgetting - consumed with connecting without human communion, we're herded onto the proverbial bandwagon by repetitive hyperbole attacking low hanging fruit, forgetting, how perpetrators - like our president, thrive on the superficialities of a surface to air-time media - target our focus.

With the possible exception of the sleaziest of sleaze it should be no surprise that Catch and Kill can be a two-way street; nor that minds acquired in the know find nothing particularly note-worthy of one vainglory peckerwood wading in the swamp of an Access Hollywood pecker-in-chief, whose length in lies belies his explosive fantasies of greatness.

Karma teaches, those who seek salvation in good ol' boys' paleface government and male-dominated Wall Street secrets, will suffer much of the same fate as the less fortunate, they seemingly can't resist abusing.

Is not the answer we're denying: hate, like that which attacked Jussie Smollett, Frank Robinson, Anita Hill, and Valerie Plame lives on just under our national consciousness, ever waiting for a little prick to release its load of anti-American venom poisoning the very ideals found in both Constitution and Bible?

Indeed, we are in turbulent waters, navigating challenging waves of self-destruction, but if we can just manage, to rid ourselves of all anchors to a hateful past, all denial of what we've wrought on ourselves and all negatively labeling others for what we cannot abide in ourselves we may just discover enough light within to enlighten our world.

We are more than a tea-stained American Dream, white-washing our Black-Face nightmares and restricting our national ID to ICE, Red, Blue and Purple States, Black v. White and LGBTQ v. straight.

Choosing Stacey Abrams to respond to SOTU was a pragmatic unification gesture. Not just because she is a woman of color, but because she is a woman who stood tall for her right to be treated equally - and proving herself superior to the corruption of opponents, won the national acclaim, audience and admiration of all Americans who like John Dingell, exemplify true patriotism: the courageous honesty to help, the Home of the Brave, find its way home.

I wish we didn't live in a nation where one's political leanings, sexual persuasions or hue of skin aroused any need for discussion. I wish we hadn't diminished that for which we were called to be stewards. I'm sorry our equality and justice was ever determined by physical body parts instead of those whose examples we follow, to whom we bestow the batons of power and whose company we keep in our aloneness.

But when a loved one is assaulted, and our first concern is the skin color of the assailant is she any less raped if the penis is white? It is we ourselves who have failed to recognize, that the power of our demons within withers, when we let go of them.

I wish no humiliating poverty on any human being; no rape for man, woman or nation; and I hope revenge, rage, justice and equality will one day be blind enough to see setting our table for eternal, internal peace.