Donald Trump has his critics, and readers of my columns know that I have been among them since 2011. And now of course, we have "Russia-gate," or whatever you want to call it, with the Mueller investigation and that of the Justice Department's Southern District of New York grinding along. Many on the Left, and I certainly among them, do see Trump & Co. as a major fascist threat. Others on the Left, and not-Left like John Brennan, the former Director of the CIA, see Trump caught in a trap by Vladimir Putin. (Many U.S., including some politicians seem to get Russia and the USSR mixed up. But Putin's only commonality with the great leader of the Russian Revolution is that they have the same first name). They see this as the reason why Trump seems to be getting as close to Putin as he possibly can while dealing with the various political and policy forces in the United States who are absolutely horrified by these developments.

Well this is one view of the relationship.
(Image by FolsomNatural)   Details   DMCA

But many others on the Left, and some in the Center and of course many on the Right, see the whole attack-on-Trump as a product of the "Deep State" which would like to overturn the results of the election (at least partially some on the Left are not at all interested in this outcome, because if Trump goes then we get the Dominionist Mike Pence. And oh boy! Here comes the echt Republican Religious Right in full force. But that's another story.) And then further, they see the developing Trump-Putin relationship as an honest one, not one created by Kompromat and Russian blackmail. And so they see what is happening now as a marvelous opportunity to achieve a "re-set" of U.S.-Russian relations.

What I have not seen (and of course it might well be there) is a discussion of the issues that would be on the table once such an effort were launched. In this column I present a brief outline of at least what some of these issues would be, noting (oh dear, though I hate to do it), that from this vantage point some of them would be impossible to resolve. Of course, if things got started soon the U.S. team would be led in these complex negotiations by the current Secretary of State, Mike Pompeo. Ah yes. Just the Trumpite person for it.

He is a former lawyer businessman, and one of the original leaders of the Tea Party in the U.S. House of Representatives. He has no diplomatic experience whatsoever. Except that in his first Confessionals campaign he called his Indian-American Democratic opponent a "Turban topper," and then-President Obama "an evil Muslim Communist." (Actually, Mr. Secretary, there aren't too many persons who fit into that particular category --- combining "Muslim" and "Communist," is sort of like combining "Catholic" and "Communist." They cannot by definition coexist in one person, but that's another story too.) And so, with what would the U.S. team (from a State Department, from which many of its most experienced diplomats have resigned, retired, or been fired), led by one with those views of "furriners," have to engage in very complex negotiations?

Well, here 'tis a brief outline of the problems list, of issues that both the Left and the Right would be dealing with, not necessarily in order of importance.

1. There is the traditional U.S. "necessity for an enemy" which has been a prominent feature of U.S. foreign policy since the end of World War II. Currently there is a list --- changing by the week/month with Trump, of course --- but Russia has been on it for quite some time.

2. Since the end of World War II, the US arms industry and monstrous spending on it, has been of vital importance to the health of the U.S. economy. Some have labeled this Military Keynesianism. History's greatest practitioner of the art was of course a former artist --- Adolf Hitler. But military spending likely plays a role it the maintenance of the Russian economy too. Peace, with two major arms industries still grinding away? Interesting.

3. Then there is the matter of the 700-plus U.S. bases around the world. Do they get maintained in an overall settlement?

4. Which leads one to the matter of Russian ports, especially warm water ones. In fact, there is only one on the Russian mainland, at Sevastopol in the Crimea. In 2014, having been on a 30-year lease to Russia from the previous Ukrainian government, the threat of cancellation by the new government installed with the aid of the U.S., led by Assistant Secretary of State Victoria Nuland, was a major reason for the Russian annexation of Crimea. It is doubtful, for that reason alone, that the Russians would be giving up Crimea anytime soon. As for Syria and the Russian interest in supporting the present murderous Assad government, it comes down to two words: Latakia and Targus. Those are their two bases right there on the Mediterranean. They won't be given up anytime soon either.

5. I will not get into the Ukrainian civil war here, except to say that open Ukrainian Nazis are becoming ever more prominent in the current state, and Nazi-like anti-Semitism, along with anti-Roma-ism, is exploding there. Putin likely doesn't care much about this development. As for Trump, as he said in reference to "Charlottesville," "there are good people on both sides."

6. How does one get NATO to pull back to what GHW Bush had promised M. Gorbachev would be its eastward-most expansion? Putin has a legitimate gripe there. But oh Gorby, in school didn't they ever teach you anything about getting important agreements in writing?

7. Both countries have embarked on a major program for "modernizing" nuclear weapons. How does one pull back from that?

8. Then there is the matter of dealing with the cessation of cyber warfare (on which the Repubs./Trump seem to be heavily dependent for their victories --- at least if you listen to Trump ask for the Russians to "do stuff" and the Repubs. in the current Congress refusing to spend any money to do something about it). 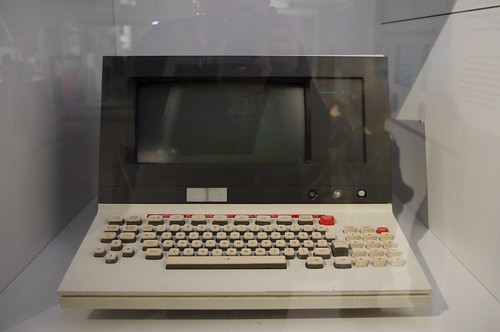 Univac Uniscope 100. Just the kind of computer the Repubs. in Congress would authorize for use against Russian election/cyber warfare.
(Image by liftarn)   Details   DMCA
9. Putin may (I'm sure he does, and so is Brennan sure, in fact I'm sure he knows just what it is, but for this consideration, let's say "may know") have "stuff" on Trump. How to deal with that, because any long-term settlement would have to get it out of the way.

10. Most important in my view, is that any settlement would have to deal with what I have called "The Clash of Capitalisms." Again, not an easy nut to crack.

Well, folks, with a list like this (and surely there are other issues as well, like say, once again opening up Russian adoptions for U.S. prospective parents), opening up negotiations, with a totally unknowledgeable capitalist kleptocrat on one side and a very knowledgeable leader of a team of capitalist kleptocrats on the other, doesn't seem like a very promising prospect. But perhaps those of all political stripes, who are promoting the concept, can come up with some truly creative ideas on how to deal with the components of this list.

Steven Jonas, MD, MPH, MS is a Professor Emeritus of Preventive Medicine at StonyBrookMedicine (NY) and author/co-author/editor/co-editor of over 35 books. In addition to his position on OpEdNews as a "Trusted Author," he is a Senior Editor, (more...)
Related Topic(s): Adoption; Anti-semitism; Assad; Blackmail; Capitalism; Crimea; Gorbachev; History; Hitler; Investigation; (more...) Military; Nazis; Negotiation; Peace; Syria; Vladimir Putin, Add Tags  (less...)
Add to My Group(s)
Go To Commenting
The views expressed herein are the sole responsibility of the author and do not necessarily reflect those of this website or its editors.