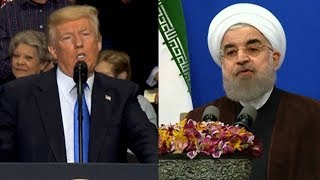 Is Trump Trying to Sabotage the Nuclear Deal to Lay Groundwork for War With Iran?
(Image by YouTube, Channel: Democracy Now!)   Details   DMCA

Iran has responded furiously to what it called "reckless" Saudi threats after the latter accused Iran of "an act of war" in carrying out a long-range ballistic strike near the Saudi capital, Riyadh.

Iran categorically denied any involvement in the missile attack at the weekend, which reports say was mounted by Houthi rebels in Yemen on Saudi Arabia's southern border.

However, the Saudi rulers were quick to accuse Iran of supplying the Houthi militants with the ballistic weapon and thereby carrying out an act of war on Saudi Arabia. No evidence was presented in support of the Saudi claims.

Nevertheless, the Saudi position was immediately backed up by US President Donald Trump who, while on a tour of Asia, asserted: "Iran just took a shot at Saudi Arabia."

This automatic concurrence of views between Trump and the Saudi rulers suggests a level of concerted thinking by Washington and Riyadh, with the aim of incriminating Iran.

In other words, Saudi Arabia's provocative accusations against Iran -- which could serve as a pretext for a military escalation -- are not just isolated bluster from Riyadh.

The alarming thing is that the Trump administration has been coordinating its hostile rhetoric towards Iran for several months now, along with Saudi Arabia and Israeli leader Benjamin Netanyahu. All three allies have been using virtually the same talking-points, making hollow accusations against Iran of sponsoring terrorism and destabilizing the Middle East region.

Trump's threat to tear up the international nuclear accord with Iran and the reimposition of economic sanctions is also part of what appears to be an agenda of stoking a confrontation with the Islamic Republic. Before its 1979 revolution, Iran was a loyal client regime of the US. Washington, it seems, has never gotten over the loss of its Persian vassal state.

So, when the Saudi rulers accuse Iran of "an act of war" over the missile strike at the weekend, that suggests another step being taken in furthering a concerted agenda worked out by the US, Israel and the Saudis for setting up a conflict.

All of this has to be put in a much bigger regional context in which there has been a dramatic shift in geopolitical power. Russia, Iran, Syria and Lebanon's Hezbollah have emerged as new dominant political forces in the strategically vital Middle East.

The defeat of the US-led axis, including Saudi Arabia and Israel, in the proxy war in Syria is a momentous setback. The newly established dominance of Russia and Iran is anathema to the US and its regional clients.

This is why the US and its client regimes are seeking to sow conflict elsewhere in the region and towards Iran in particular. It's a nefarious consolation prize for having their regime-change plans spectacularly upended in Syria by Russia and Iran.

When Lebanese prime minister Saad Hariri was summoned to Saudi Arabia at the weekend to tender his resignation, it was obviously a ploy to smear Iran and its ally Hezbollah. Hariri claimed in a Saudi television broadcast that he was running for his life to escape an assassination plot hatched by Iran and Hezbollah.

The sensationalist claims made by Hariri were dismissed by Iran as ridiculous. Even Lebanese President Michel Aoun treated the claims with derision, saying that he expects Hariri to return to Beirut immediately and explain his "surprise" resignation while standing in his own country, not from a TV studio in some foreign capital.

Related Topic(s): Iran War; Israel; Saudi Arabia; Trump Cruelty, Add Tags
Add to My Group(s)
Go To Commenting
The views expressed herein are the sole responsibility of the author and do not necessarily reflect those of this website or its editors.