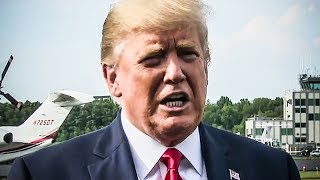 Danish Politicians Mock Trump As Crazy Over His Idea To Buy Greenland
(Image by YouTube, Channel: The Ring of Fire)   Details   DMCA

Greenland is open for business, but it's not for sale, Greenland's foreign minister Ane Lone Bagger told Reuters after hearing that President Donald Trump asked his advisers about the feasibility of buying the world's largest island.

Sources told CNN that President Trump has made repeated inquiries into the possibility of buying Greenland, an autonomous territory, from the Danish government. He has raised the issue during meetings and dinners and even gone so far as to have White House counsel examine the possibility. The story was first reported by The Wall Street Journal.

A Republican congressional aide told the AP that Trump brought up the idea in conversations with lawmakers so many times it made them wonder if he was serious, though the lawmakers did not take the idea seriously.

Danish politicians wasted no time in ridiculing the idea, as Reuters reported.

"It has to be an April Fool's joke. Totally out of season," former Prime Minister Lars Lokke Rasmussen wrote on Twitter.

"If he is truly contemplating this, then this is final proof, that he has gone mad," said Soren Espersen, foreign affairs spokesman for the Danish People's Party, to a Danish broadcaster. "The thought of Denmark selling 50,000 citizens to the United States is completely ridiculous."

This is actually not the first time the U.S. has showed interest in acquiring Greenland. In 1946, the U.S. offered to pay Denmark $100 million to buy Greenland, the AP reported.

Greenland is home to the U.S. military's northernmost base, the Thule Air Base, which is about 750 miles north of the Arctic Circle. The base, a strategic outpost during the Cold War, features a radar and listening post that reaches far into Russian territory. It also houses a missile warning system that can warn of incoming intercontinental ballistic missiles, according to CNN.

Greenland officials wasted no time to use the free publicity to tout its natural resources and to sell itself as a tourist destination, as USA Today reported.

"#Greenland is rich in valuable resources such as minerals, the purest water and ice, fish stocks, seafood, renewable energy and is a new frontier for adventure tourism," said the Greenland Ministry of Foreign Affairs in a tweet that included a link to the territory's tourism website.

The idea to buy Greenland started with friends of Trump's outside the administration who brought up the idea of purchasing Greenland as a potential legacy-builder on par with Eisenhower giving statehood to both Alaska and Hawaii, according to the Wall Street Journal. Trump thought the world's largest island might be for sale because he heard that Denmark was facing financial trouble.

"What do you guys think about that?" Trump asked a room fool of advisers, as The Wall Street Journal reported. "Do you think it would work?"

Related Topic(s): Trump Moron; Trump Wants To Buy Greenland, Add Tags
Add to My Group(s)
Go To Commenting
The views expressed herein are the sole responsibility of the author and do not necessarily reflect those of this website or its editors.