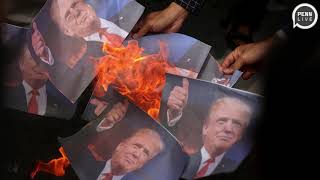 One of the most consequential actions Donald Trump took during the first year of his presidency was to recognize Jerusalem as the capital of Israel in December 2017. When the Palestinians predictably responded by pulling out of the US-led "peace process," Trump retaliated by cutting US financial support to the United Nations Relief and Works Agency for Palestine Refugees in the Near East (UNRWA) by more than 50 percent.

"A Death Sentence" for Gazan Refugees

The US cutback in aid to UNRWA critically threatens the access of Palestinian refugees to food, health care and education.

In Gaza, 1.3 million Palestinian refugees, who comprise 70 percent of Gaza's population, depend on UNRWA for food assistance. The refugee crisis was aggravated by Israel's 2014 massacre in Gaza.

Established by the UN General Assembly in 1949, UNRWA was mandated to provide assistance and protection to roughly 5 million registered Palestinian refugees forced off their land by the 1948 creation of Israel. Palestinians call this event the "Nakba," which is Arabic for catastrophe. This year marks its 70th anniversary.

The United States, UNRWA's largest donor, contributes $125 million annually. But Trump is withholding $65 million from the next scheduled US payment unless the Palestinians participate in peace talks with Israel. On January 2, Trump tweeted, "with the Palestinians no longer willing to talk peace, why should we make any of these massive future payments to them?"

But the consequences of withholding these payments are deadly.

"Any reduction of aid would be a death sentence for refugees in Gaza," Ahmed al-Assar, who lives in the Nuseirat refugee camp in Gaza, told The Washington Post.

Husam Zomlot, leader of the Palestinian delegation to the United States, said that "taking away food and education from vulnerable refugees does not bring a lasting and comprehensive peace. ... The access of Palestinian refugees and children to basic humanitarian services such as food, health care and education should not be a bargaining chip, but a US and international obligation."

Last week, the European Parliament responded to the impending humanitarian crisis occasioned by Trump's cutback by urging the European Union and its member countries to increase their funding of UNRWA. In its February 8 resolution, the European Parliament warned of "damaging impacts on access to emergency food assistance for 1.7 million Palestine refugees and primary healthcare for 3 million, on access to education for more than 500,000 Palestinian children in 702 UNRWA schools, including almost 50,000 children in Syria, and on stability in the region."

Trump appears unfazed by the disaster his actions have created. At the World Economic Forum in Davos, Switzerland, in January, Trump said he would suspend aid to the Palestinians "unless they sit down and negotiate peace." Hanan Ashrawi, a member of the Palestinian Liberation Organization's executive committee, called Trump's decision "blackmail."

On February 4, "Western diplomatic sources" unveiled the leaked United States' "peace plan" for Israel/Palestine, dubbed the "deal of the century." The moniker refers to Trump's promise that his son-in-law Jared Kushner and Middle East envoy Jason Greenblatt would work out "the deal of the century" between Israel and the Palestinians.

The plan -- which reflects the wishes of Israel, with no Palestinian approval or even input -- would allow Israel to annex 10 percent of the West Bank area. It would also allocate portions of Ashdod and Haifa for Palestinian use, but Israel would continue to oversee security there. It would grant Palestinians safe passage between the West Bank and Gaza under Israeli sovereignty, and would give "Israel the upper hand in the demilitarized Palestinian state, which will have its own police force," according to Al-Monitor.

Related Topic(s): Israel; Jerusalem; Nakba; Palestinian; Refugees, Add Tags
Add to My Group(s)
Go To Commenting
The views expressed herein are the sole responsibility of the author and do not necessarily reflect those of this website or its editors.