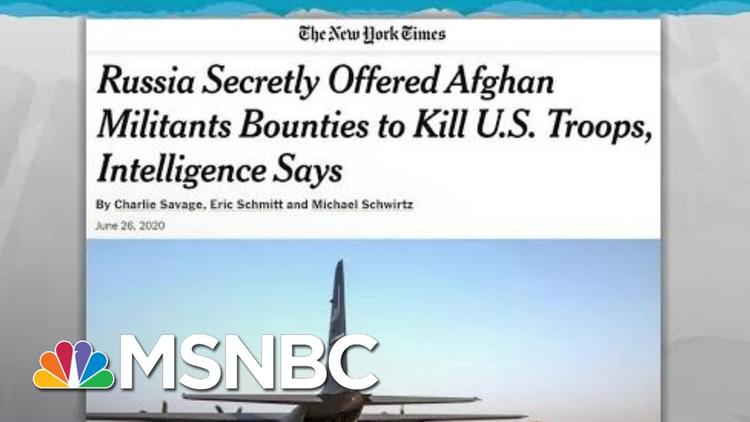 Charlie Savage; Eric Schmitt and Michael Schwirtz at the New York Times broke the blockbuster story on Friday that GRU 29155, a violent unit of Russian military intelligence accused of poisoning a double agent in Britain in 2018, had offered militants and criminals a bounty if they killed coalition forces (US, British and other NATO troops) in Afghanistan. Only 4 US personnel have been killed in Afghanistan this year, all before a February agreement with the Taliban, but in 2019 some 20 were killed.

Moreover, the NYT said its sources in US intelligence alleged that Trump was briefed on this intelligence in March and that a menu of options was presented to him, from lodging a diplomatic complaint to specific sanctions (presumably in GRU commanders).

The intelligence was gleaned by the US military and the CIA from interrogations of captured criminals and militants in Afghanistan. There were indications that some bounties had been paid, which means that the GRU had US troops killed.

Nick Paton Walsh, Veronica Stracqualursi and Radina Gigova CNN report that Director of National Security John Ratcliffe, a strong Trump supporter who is a political appointee rather than an intelligence professional, denied the report that Trump was briefed on the GRU instigation.

I'll say right away that I don't find Ratcliffe's denial plausible. If the intelligence were gathered, it would have been briefed to the president.

Both Russia and the Taliban are denying the story.

In Washington, a leak like this makes you ask questions. Who leaked the information and why? Then, US intelligence has had major failures, such as the supposed biological and nuclear weapons in Iraq in 2003, and you wonder how solid this information tortured out of criminals and militants is.

Also, in intelligence work there is always a problem of false flag tradecraft. Anyone could pretend to be GRU as a cover for such an operation. It worries me that the intelligence seems to be from the ground up, rather than the result of a penetration of the GRU itself.

Another question is why the GRU would have done this.

You could see a program to increase US troop casualties as an attempt to demoralize Washington and speed the US departure from Afghanistan.

The problems with that theory are many. First, there isn't a need to give Trump a reason to leave. Trump has long wanted to withdraw all US troops from that country. He believes that the white working class resents spending blood and treasure there after all these years. He thinks he can run on getting out of Afghanistan as an accomplishment. High US government officials are trying to convince Trump to leave at least 1,500 US troops in country to gather intelligence. He seems to want zero troops there.

Second, it isn't clear that Russia wants the US out of Afghanistan. In fact, when President Obama was preparing to pull out early in his second term, Russian president Vladimir Putin pleaded with him not to do it.

Things could have changed, since the US pushed back against the Russian annexation of Crimea and since Russia came to be at loggerheads with fundamentalist US proxies in Syria and Libya.

But the place to start would be with what Russian observers actually say about Afghanistan. And I fear that almost no one in the newspapers of record will ask this question. So let me take a stab at it here:

Related Topic(s): Afghanistan Drawdown; Russian Propaganda; Trump And Putin; Trump Mental Health; Trump Russia Connection, Add Tags
Add to My Group(s)
Go To Commenting
The views expressed herein are the sole responsibility of the author and do not necessarily reflect those of this website or its editors.