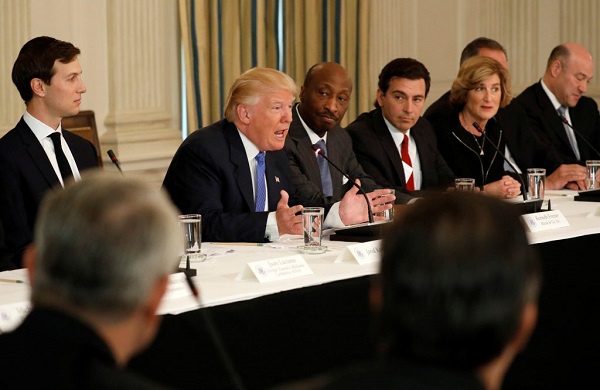 Throughout his presidency, Donald Trump has allowed large corporations to run rampant, exploit people, and get away with it. Trump considers himself above the law, boldly claiming, "I have an Article 2, where I have the right to do whatever I want as president."

For more information about Trump's misdeeds, please see the Articles of Impeachment proposed by me and constitutional law experts Bruce Fein and Louis Fisher in the December 18, 2019, Congressional Record, page H12197.

In 2017, Trump betrayed his own voters by giving the corporate rich a nearly two trillion dollar tax cut instead of fulfilling his promise to invest in repairing infrastructure and expanding well-paid job opportunities.

These tax cuts for the rich and big corporations, which benefited the Trump family, ran up the deficit for our children and were largely used to give executives bonuses and let CEOs waste money on stock buybacks. In short, the corporate bosses lied to the Congress, saying they wanted these tax cuts to invest and create jobs, but actually used them to enrich themselves.

The New York Times reported 98 lifesaving regulations were revoked, suspended, or simply replaced with weaker versions. What remains on the books is not enforced.

Trump, during his failed business career and bankruptcies, saw the law as a nuisance and breaking and escaping justice as a competitive advantage.

While raising huge sums for his reelection campaign from business lobbyists, Trump keeps giving them no-law government, more loopholes for tax escapes ($170 billion more buried in the $2.2 trillion relief/bailout legislation), more corporatist judges to shut you down in the courtroom, and more of your taxes for their endless corporate welfare greed.

Big companies such as banks, insurance companies, real estate behemoths, and Silicon Valley giants have so many tax escapes and cuts that they're moving toward tax-exempt status.

Howard Stern, a longtime friend of Trump who promoted Trump's notoriety early on, has recently called on Trump to resign. Stern said that, in reality, Donald Trump was "disgusted" by his own voters. Why won't more Trump voters realize that Trump has nothing but contempt for them? Trump will betray his followers at every turn.

Trump, with congressional Republicans, wants more legislation giving big companies immunity from lawsuits by victims for their negligently harmful products and services. Another rigging of the system.

Trump's agencies actually announced that they're putting their law enforcers on the shelf. The Food and Drug Administration (FDA) astonishingly told foreign importers of food and medicine that inspections overseas are suspended. The Environmental Protection Agency (EPA) signaled similar retreats, as have other enforcement agencies. Why would the Trumpsters signal green lights for corporate crooks? Especially since corporate scams and other corporate crimessome crude, others sophisticatedare exploding as trillions pour out of Washington.