Confrontational rhetoric from the Pentagon and State Department is just noise, the real Great Game plotting is on a deeper level

Incoming US Secretary of State "T Rex" Tillerson told the Senate Foreign Relations Committee that China should be denied access to islands in the South China Sea. Militarization of the islands, he said, was "akin to Russia taking Crimea" from Ukraine.

Incoming Pentagon head James "Mad Dog" Mattis told the Senate Foreign Relations Committee the established world order is under its "biggest attack" since World War I: from Russia, as Putin is trying to "break" NATO, "from terrorist groups and with what China is doing in the South China Sea."

In principle, these outbursts spell out an unchanged script for both the Pentagon and the US State Department as we approach the Donald Trump era. Pentagon doctrine rules that Russia and China, in that order, are the top "existential threats" to the US.

Yet in the shadow play of the New Great Game in Eurasia, this is all sekala -- the tangible; the real action is in the realm of niskala, in the invisible shades of gray.

And that brings us once again to Henry Kissinger, the putative dalang -- puppet master -- of Trump's foreign policy.

As leaked late last year in Germany's Bild Zeitung newspaper, Kissinger has drafted a plan to officially recognize Crimea as part of Russia and lift the Obama administration's economic sanctions. 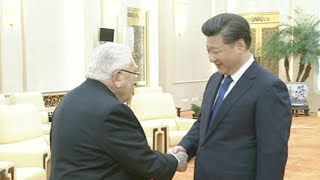 The plan fits into Kissinger's overall strategy -- call it a traditional British Balance of Power, or Divide and Rule, approach -- of breaking up the Eurasian front (Russia-China-Iran) that constitutes the real "threat" to what Mattis defines as the "established world order." The strategy consists in seducing the alleged weaker top "threat" (Russia) away from the stronger (China), while keeping on antagonizing/harassing the third and weakest pole, Iran.

Kissinger is certainly more sophisticated than predictable US Think Tankland in his attempt to dismember the Shanghai Cooperation Organization, one of key nodes of the Russia-China strategic partnership. The SCO has been on the go for a decade and a half now. Iran, an observer, will soon become a full member, as will India and Pakistan; and Turkey -- after the failed coup against Erdogan -- is being courted by Moscow.

German analyst Peter Spengler adds a juicy teaser -- if Kissinger's "Metternichian approach would include some degree of 'harmonization' with Russia, how will a Trump presidency then manage to contain the re-engineered ally Germany?" After all, a key priority for sanctions-averse German industrialists is to vastly expand business with Russia.

Russia a threat to China?

Kissinger's strategy essentially tweaks the early 1970s Trilateral Commission, largely advanced by his rival dalang Dr Zbigniew "Grand Chessboard" Brzezinski, according to which geopolitics is to be managed by North America, Western Europe and Japan.

A nice touch is that Kissinger, alongside "T Rex" Tillerson and Dr Zbig himself, is on the board of trustees of Washington think tank the Center for Strategic and International Studies (CSIS). It's all in the family.

The US deep state plutocracy never sleeps. Admitting both Russia and China, linked by a strategic partnership, as equal stakeholders in the "established world order" is anathema; that would imply the end of US hegemony.

Related Topic(s): China Politics; China Russia Alliance; Jobs; Pentagon; Politics; Trump Foreign Policy, Add Tags
Add to My Group(s)
Go To Commenting
The views expressed herein are the sole responsibility of the author and do not necessarily reflect those of this website or its editors.