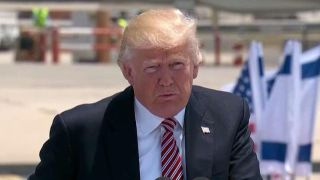 Trump to Israel: We are with you
(Image by YouTube, Channel: Fox News)   Details   DMCA

As I said, Trump is America's first Zionist president. But apparently Trump does not understand that a declaration he signs giving Golan Heights to Israel has no authority under international law. I doubt many others will prostitute themselves in this way, so all Trump has achieved is to line up the United States with Israel's illegal absorption of occupied territory.

Of course, in America stupidity can be found wherever one looks. Listening to the presstitutes today, especially the imbeciles at NPR, the American media is so completely stupid that the morons are unable to comprehend that there cannot be obstruction of justice if there is no crime. Mueller says there is no crime, so how could Trump obstruct justice in the absence of a crime? What justice was obstructed?

Don't expect the idiot presstitutes to explain. Or Donna Brazile. Or the imbeciles Nadler and Schiff and the rest of the junk politicians who pollute American political life beyond the point of total ruin.

Related Topic(s): Media Bias; Media Fake News; Presstitutes; Trump Israel, Add Tags
Add to My Group(s)
Go To Commenting
The views expressed herein are the sole responsibility of the author and do not necessarily reflect those of this website or its editors.