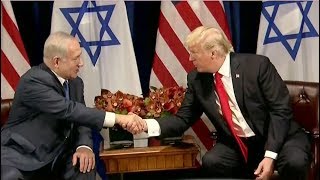 It is impossible not to feel some sympathy for President Donald Trump. His agenda to restore normal relations with Russia and to end Washington's gratuitous wars has been frustrated by the "Russiagate hoax" that the military/security complex and corrupt Democratic Party used in the effort to remove Trump from the presidency. He and his wife have been embarrassed by the fake "Steele Dossier" paid for by the Clinton campaign and used by a corrupt FBI leadership to illegitimately obtain spy warrants on Trump and his associates. Accused of cavorting with prostitutes in Moscow and confronted with claims by a porn star of an affair in order to boost the recognition value of her name, Trump and his wife have experienced uncomfortable times. Now that the lies the presstitutes have told since 2016 have been exposed by Mueller's inability, despite his use of every dirty trick, to come up with any indictable offense connected to "Russiagate," the psychopathic liars who comprise the presstitute media are on the verge of tears. Mueller has betrayed them, they claim, by letting Trump off the hook.

In other words, there will be no apology to Trump. Don't be surprised to see the deranged accusation that Mueller himself was part of the Russian collusion and was appointed for the purpose of covering it up.

Weakened by "Russiagate" accusations, Trump was forced to back off his agenda of ending the wars. He put policy in the hands of neoconservative warmongers like John Bolton and Pompeo, and expanded the prospect of wars into Iran and Venezuela. Trump in office bears little resemblance to Trump campaigning for the presidency.

Under such pressure Trump has broken American diplomatic precedent and international law with respect to Jerusalem and the Syrian Golan Heights in his effort to seek the protection of the powerful Israel Lobby. He recognized Jerusalem as Israel's capital and moved the US Embassy there, and on March 22 he said it is time to accept the reality of Israel's occupation of Syria's Golen Heights as Israeli territory. This extreme pandering to Israeli Zionism is a disgrace to the United States.

It is not clear how Trump has benefited from his groveling. If polls can be believed, Trump's pandering has done him no good with American Jews, 70% of whom disapprove of Trump. Moreover, the Israel Lobby failed to use its influence to silence the presstitutes false "Russiagate" accusations against Trump. Perhaps the Lobby wanted to keep Trump in a weak position in order to extract more concessions from him.

Nevertheless, by terminating US aid to Palestinians and by being the only head of state to fully recognize Jerusalem as the Israeli capital and to assign Syrian territory to Israel, Trump has established a US relationship with Israeli Zionism that the US has with no other state and that Israel has with no other state. On any issue that pertains to Israel's interest, Trump has placed US foreign policy into Israel's hands.

Various diplomats and analysts are saying that Trump gifted the Golan Heights to Israel in order to help out Netanyahu who faces indictment for corruption. I think the explanation is that the neoconservatives running US foreign policy are Zionists and that the only ally Trump has, other than the remnants of the American working class now dismissed as "white supremacists," is the Israel Lobby.

The hostility of the Trump regime toward Russia, China, North Korea, Iran, Syria, and Venezuela does America no good (except for the shareholders of the military/security complex). But the hostility toward Iran, Syria, and their protector -- Russia -- does benefit Israel. Israel has been frustrated in its desire to occupy southern Lebanon by the Hezbollah militia, which is supported by Syria and Iran. If Washington can destabilize Syria and Iran, as it did Iraq and Libya, Hezbollah would be cut off from support. Moreover, Washington's accusations against Russia and missile bases on Russia's border can distract Russia's attention and resources away from the Middle East and leave Syria and Iran less able to resist the US/Israeli pressures.

Trump, who campaigned on peace so that America's attention and resources could be focused on America's own situation, now has the US more embroiled than ever in the affairs of foreign countries, principally Israel, a Zionist state. This fact makes it reasonable to conclude that Trump is America's first Zionist president, a development that bodes more ill for the world.

Related Topic(s): American Jews; Jerusalem; Russiagate; Trump And Bolton; Trump Cornered; Trump Israel; Zionism; Zionists, Add Tags
Add to My Group(s)
Go To Commenting
The views expressed herein are the sole responsibility of the author and do not necessarily reflect those of this website or its editors.