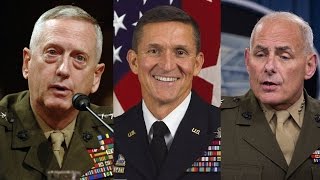 Trump Has Appointed More Generals in His Cabinet Than Any President Since World War II
(Image by YouTube, Channel: Democracy Now!)   Details   DMCA

An article yesterday at NBC focusing on Trump and "his" generals got me to thinking on this subject again. Its author, Suzanne Garment, suggests that Trump likes generals as obedient alpha males. They lend him credibility without directly threatening his delicate ego. And there's truth in this.

But I want to focus on other reasons for Trump's preference for generals in high positions. A year ago, I wrote an article for TomDispatch.com on "All the President's Generals." That article focused mainly on the potential impact of these generals on America's foreign policy and domestic culture. As I wrote last December:

Collectively, the team of Mattis, Flynn, and Kelly could not be more symbolic of the ongoing process of subversion of civilian control of the military. With Trump holding their reins, these self-styled warriors will soon take charge of the highest civilian positions overseeing the military of the world's sole superpower. Don't think of this, however, as a "Seven Days in May" scenario in which a hard-headed general mounts a coup against an allegedly soft-hearted president. It's far worse. Who needs a coup when generals are essentially to be given free rein by a president-elect who fancies himself a military expert because, as a teenager, he spent a few years at a military-themed boarding school?

In all of this, Trump represents just the next (giant) step in an ongoing process. His warrior-steeds, his "dream team" of generals, highlight America's striking twenty-first-century embrace of militarism.

I continue to think this is true. Trump is empowering further military adventurism, even as he reinforces military-style solutions to problems. But there are other reasons for Trump's tight and eager embrace of the military.

Basically, by embracing the military and elevating it (while feeding it lots of money), Trump has neutralized it as a rival to his power. Indeed, he is borrowing from the military's authority and standing within our culture to bolster his own.

Recall how Candidate Trump was often quite critical of the U.S. military. He knew more than the generals, he said. Their wars he often called wasteful follies. He was going to win (or end) these wars, he claimed, and hinted that quite a few "loser" generals might be on the receiving end of his infamous "You're fired" line.

You hear none of this today. Trump is at pains to praise the military and his generals. He says they're on a winning path, even in Afghanistan (because of Trump's decisions, naturally). He rewards them with record budgets and unalloyed praise.

And it's working. The military (and the larger national security state) is content with Trump. He's letting them have their way, which is another way of saying Trump is having his way.

In American society today, there aren't too many power centers that truly can challenge Trump. The media he's diminished with all his attacks ("Fake news!"). A Republican Congress remains quietly subservient. Trump is stacking the judiciary with conservative judges to his liking. The Democratic Party remains feckless and divided. Bankers and corporations? Trump has hired the former and given a huge gift to the latter in the latest Republican tax cut for the richest.

When you think about it, the one power center that could challenge Trump is the military-industrial complex: America's fourth branch of government. Yet by hiring so many of its generals and by praising it while passing loads of moola its way, Trump has co-opted its authority and power, attaching it to himself in his role as commander-in-chief.

Trump's last hurdle may be the Robert Mueller investigation into Russian meddling and possible complicity or obstruction by Trump. If Trump gets past this (perhaps even by firing Mueller), is there anyone left with the balls and the authority to stop his ambition and designs as an authoritarian leader?

Related Topic(s): Authoritarianism; Commander-in-chief; Generals; Trump Ego, Add Tags
Add to My Group(s)
Go To Commenting
The views expressed herein are the sole responsibility of the author and do not necessarily reflect those of this website or its editors.