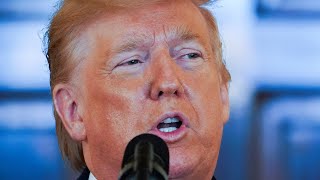 Following Iran's retaliatory missile strikes on two US military bases in Iraq on Wednesday, President Donald Trump imposed unspecified new sanctions on Iran, but told Tehran that the US is "ready to embrace peace for all who seek it."

In a televised address from the White House on Wednesday, Trump did not say the U.S. would further escalate military action against Iran following Iran's ballistic missile strikes, which the Iranian foreign minister said concluded Iran's response to the U.S. killing of Gen. Qassim Suleimani, the leader of the Quds Force of the Iranian Revolutionary Guard.

Trump reported that there were no deaths or injuries and minimal property damage from the Iranian missile strikes over night. "Iran appears to be standing down, which is a good thing for all parties concerned and a very good thing for the world," Trump said.

Iran's accurate missile attack demonstrated its capabilities, without causing damage that would have tempted Trump to further respond. Cooler heads prevailed on both sides of the conflict, with the prospect of a disastrous major war that would put millions of lives and the world economy at risk staring them both in the face.

While the Iranian response may not have satisfied an Iranian population enraged over the murder of a revered military leader, Ayatollah Ali Khamenei said the ultimate revenge would be the expulsion of U.S. troops from the Middle East.

Trump has said on more than one occasion that he would like to voluntarily do that -- a move that has been met with strong bi-partisan opposition, committed as it is to American military intervention in the region.

In his address, Trump implied that the U.S. has little reason to remain in Middle East because the U.S. was now the number one producer of oil and gas.

"Today, I am going to ask NATO to become much more involved in the Middle East process. Over the last three years, under my leadership, our economy is stronger than ever before and America has achieved energy independence. These historic accomplishments changed our strategic priorities. These are accomplishments that nobody thought were possible. And options in the Middle East became available. We are now the number-one producer of oil and natural gas anywhere in the world. We are independent, and we do not need Middle East oil."

These remarks will need clarification over the coming days, though with Trump, it's possible they will never be remarked on again, leaving uncertainty about his intentions. One interpretation is that since the U.S. no longer needed Middle East energy the heavy presence of U.S. forces in the region was also no longer needed and that he would ask other NATO nations to share the military involvement.

Despite this, the U.S. has refused to withdraw its troops from Iraq, despite an Iraqi parliament resolution demanding they leave. Trump's intentions to withdraw from Syria were met by bi-partisan condemnation, so he has kept them, ironically, to control Syria's oil.

Trump's remarks were filled with distortions and outright lies, which form the premise for much of America's misguided foreign policy, especially in the Middle East. He once again said, "Iran has been the leading sponsor of terrorism," when any neutral observation would show that U.S. ally Saudi Arabia by far holds that title. The vast majority of major terrorist groups, such as al-Qaeda and ISIS, are Sunni, not Shia.

Almost everything he said about Suleimani was false. "Last week, we took decisive action to stop a ruthless terrorist from threatening American lives," he said. "At my direction, the United States military eliminated the world's top terrorist."

Related Topic(s): Assassination; Iran; Iranian General Killed; Lies; Sanctions; Trump And Iran; Trump And Nato, Add Tags
Add to My Group(s)
Go To Commenting
The views expressed herein are the sole responsibility of the author and do not necessarily reflect those of this website or its editors.