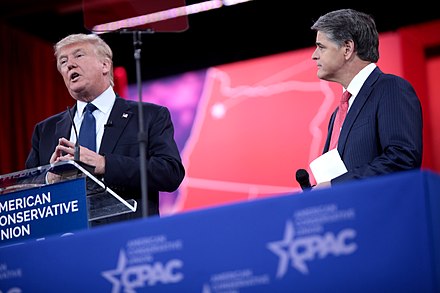 One of the most despicable episodes in the sordid history of Fox News was the attempt, led by Sean Hannity, to deflect the attention of the Fox cult away from Robert Mueller's investigation into Russia's interference in the 2016 presidential election.

According to Brian Stelter, writing in his new book, HOAX: Donald Trump, Fox News, and the Dangerous Distortion of Truth, these are the basic facts: "Russian hackers targeted the Clinton campaign and the DNC [Democratic National Committee]. They stole thousands of emails and other materials. Then, via WikiLeaks, they dumped the documents at specific times to help Trump win the election. Trump and his associates welcomed these dirty tricks. Roger Stone may have gone even further and coordinated with WikiLeaks. Some campaign aides believed that Trump and Stone talked about WikiLeaks dumps ahead of time, though neither man has ever admitted it. Russian operatives tried to help Trump in other ways, including through a torrent of online propaganda, but the DNC hack was critical."

On May 9, 2017, President Trump fired FBI Direct James Comey, thinking that it would remove the pressure from the investigation into his campaign's ties with Russia. Actually, the firing created a firestorm that led to the appointment of special counsel, Robert Mueller. When informed about the special counsel, Trump went ballistic: "This is the end of my presidency, I'm fucked."

However, as Mr. Stelter notes, Trump "was wrong about that. It wasn't actually the end of his presidency - because he had Hannity and the Fox base,"

Running with a story actually planted by a Russian intelligence agency, ideologues working for Fox (Rod Wheeler, Malia Zimmerman, and Ed Butowsky) advanced a report alleging that Seth Rich -- a staffer for the DNC who was murdered in Washington D. C. on July 10, 2016 - was actually an insider whistleblower who stole the DNC emails and gave them to WikiLeaks. Wheeler actually claimed that "multiple sources" said Rich "had contact with WikiLeaks." Wheeler's so-called sources became the basis of breaking news on Fox & Friends on May16, 2017.

Hannity was the worst spreader of the bogus story. If Rich was the leaker, Hannity said, "wouldn't that blow the whole Russia collusion narrative --- out of the water?" According to Mr. Stelter, "Hannity brought it up day after day on his radio show and night after night on TV, even after reporters like CNN's Oliver Darcy proved it was bogus." Hannity's repeated lies were "incredibly cruel to the Rich family, for it compounded the misery of losing a loved one."

Indeed, it proved to be fake news. Reporters from other networks soon exposed the Rich story as bogus, and Wheeler eventually admitted that his quotes were fabricated. But the big lie served its purpose. It duped the Fox cult into swallowing even more lies, namely Trump's denials of his campaign's genuine collusion with Russia.

Were that not bad enough, Hannity actually "knew about Don Jr. and [Paul] Manafort's infamous June 9, 2016, 'dirt' meeting at Trump Tower more than a week before The New York Times revealed to the world that Don Jr. had allowed a Russian lawyer who was offering anti-Clinton opposition research to pay a visit. Hannity even strategized with the Trumps "about how to keep [news of the meeting] from coming out, and what to say if it did."

When news of Junior's collusion came out, Fox then acted as if it was no big deal. Needless to say, Hannity's cooperation in an attempt to cover-up news is precisely the opposite of what one should expect from a news organization. As David Plouffe so candidly noted, when he blistered Fox & Friends Brian Kilmeade, "This is not a debate. Media outlets should hold the powerful to account - not the account to the powerful."

"Fox hoped people would forget that Hannity's handling of the matter was morally reprehensible. His behavior served several Trumpian purposes - it distracted from the real-life Russia investigation, gave the MAGAsphere an alternative explanation, and fixed blame on a Democrat who couldn't speak in his own defense."

On August 19, 2020, Jennifer Rubin wrote an opinion piece for the Washington Post titled, "As it turns out, there really was collusion between the Trump campaign and Russia." Quoting a news report from the Washington Post, Ms. Rubin wrote: "The long-awaited report from the [Republican controlled] Senate Intelligence Committee contains dozens of new findings that appear to show more direct links between Trump associates and Russian intelligence, and pierces the president's long-standing attempts to dismiss the Kremlin's intervention on his behalf as a hoax." These include a determination "that a longtime partner of Trump campaign chairman Paul Manafort was, in fact, a Russian intelligence officer."

The Senate Intelligence Report was issued nearly sixteen months after the release of the Mueller Report, which found no indictable evidence of conspiracy with Russia, but ten instances of possible criminal obstruction of justice. Specifically, the Mueller report stated: "While this report does not conclude that the President committed a crime, it also does not exonerate him."

Both Trump and Fox News falsely hailed the report as an exoneration of the president. Not Judge Napolitano, however. As he wrote on the Fox News website, "Mueller laid out at least a half-dozen crimes of obstruction committed by Trump."