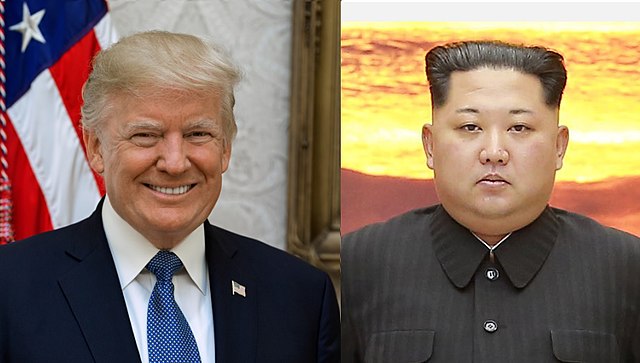 But no, the meeting did take, confirmed by none other than US President Donald Trump. In a tweet this week, Trump wrote:

"Mike Pompeo met with Kim Jong Un in North Korea last week. Meeting went very smoothly and a good relationship was formed. Details of Summit are being worked out now. Denuclearization will be a great thing for World, but also for North Korea!" -- Donald J. Trump (@realDonaldTrump) April 18, 2018

Pompeo, who is awaiting confirmation of his new post as Secretary of State before the Senate later this month, is known for his hawkish foreign policy views. As CIA chief, he notoriously said that he wanted to make the feared quasi-paramilitary organization even more "vicious."

Now Pompeo is serving as a peace tribune to North Korea, which until recently he has taken a confrontational stance towards.

When he was nominated last month to take over from outgoing Rex Tillerson at the State Department, some observers expected the surprise rapprochement between the Trump White House and the North Korean leader would be subsequently nixed. Pompeo, and the advent of John Bolton as Trump's National Security Adviser, personify the neocon faction in Washington.

The emerging fact that Pompeo met in person with Kim Jong-Un in Pyongyang and that the pair apparently formed a "good relationship" seems a rather dizzying revelation.

It was the highest level meeting between a senior American official and a North Korean leader since 2000 when then Secretary of State Madeleine Albright, from the Bill Clinton administration, met with Kim Jong-Il -- the father of the state's current leader.

Not only that, but Pompeo and Kim Jong-Un reportedly discussed making preparations for a forthcoming face-to-face summit between Kim and Trump. That encounter could take place in June, although a venue has not yet been finalized. It would be an unprecedented breakthrough and the first time a sitting American president has ever met a North Korean leader.

Trump took his inner circle aback last month when he impulsively accepted an invitation from North Korea's Kim to hold a one-on-one summit. Trump jumped at the chance even before his national security team had been consulted. It appears that the president is very much still on board for the tête-a-tête.

This is a startling turnaround in bilateral communications. During Trump's first year in office, he frequently used incendiary rhetoric towards North Korea, disparaging Kim as "little rocket man," and threatening to use overwhelming military force against the northeast Asian nation over its clandestine nuclear-weapons program.

For his part, Kim was none too shy about firing back the rhetoric at Trump, mocking the American leader as "an old dotard" and threatening to strike the US mainland with nuclear ballistic missiles. It is not confirmed if North Korea has reached the capability to hit North America with nuclear warheads. But it seems that Kim's newfound willingness to engage in diplomacy with the US may be prompted by a sense of strength from having achieved that nuclear threshold.

Others would say that the ratcheting of US-led economic sanctions under Trump has forced Pyongyang to the negotiating table.

Whatever the exact motive force, the upshot is that the American and North Korean leaders are willing to talk. That outcome of jaw-jaw is better than war-war, as Winston Churchill once said.

Related Topic(s): Donald Trump; Kim Jong-un; North Korea; Peace Talks; Treaty, Add Tags
Add to My Group(s)
Go To Commenting
The views expressed herein are the sole responsibility of the author and do not necessarily reflect those of this website or its editors.