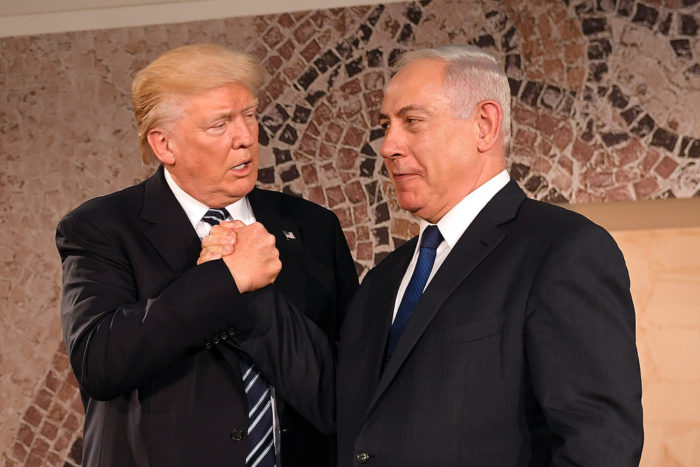 Trump and Netanyahu at the Israel Museum in Jerusalem in 2017.
(Image by (U.S. Embassy Jerusalem via Flckr))   Details   DMCA
>

Within hours of the so-called Trump peace plan on the Palestine-Israel question being revealed on Tuesday, Israeli Prime Minister Benjamin Netanyahu said he would propose the first phase of West Bank annexation to the Israeli cabinet on Sunday.

Netanyahu sprang into action after the plan, which he essentially created, was unveiled by Trump with Netanyahu at his side at the White House. It was the final piece of a strategy that only a U.S. administration as slavishly pro-Israel as Trump's could give Netanyahu.

First, the Israeli prime minister got the U.S. on Dec. 6, 2017 to recognize all of Jerusalem, including Arab East Jerusalem, as Israel's capital with the move of the U.S. embassy there, something every previous U.S. administration had refused to do.

Then on March 25, 2019, Trump recognized Israel's illegal 1981 annexation of Syria's Golan Heights. Just three months ago Secretary of State Mike Pompeo declared expanding Israeli colonies on the West Bank as legal, a violation of the 4th Geneva Convention, which says: "The Occupying Power shall not deport or transfer parts of its own civilian population into the territory it occupies."

The last piece Netanyahu needed was Tuesday's much-awaited "peace plan" from the most anti-Palestinian administration in U.S. history. Even The New York Times' coverage admitted the plan was strongly biased towards Israel and that Netanyahu was in on the secretive plan all along.

The operation was run by Trump's son-in-law, Jared Kushner, whose family are close personal friends with Netanyahu. It is a plan being imposed on the Palestinians rather than arising out of Palestinian-Israeli negotiations as past U.S. administrations tried to do.

The Netanyahu/Trump plan calls for new Israeli borders that intrude on Palestinian territory. The Palestinian "state" envisioned includes no military force and the Israeli military would control and patrol the Palestinian border with Jordan. In the deal Trump is trying to buy off the Palestinians' aspiration for independence for $50 billion. (On Tuesday, as the plan was being unveiled, Trump was facing an impeachment trial in the Senate and Netanyahu was formally indicted on corruption charges.)

If the Israeli cabinet approves Netanyahu's first annexation proposal, which will include the Jordan valley, Palestinians living in annexed territories would come under direct Israeli rule but, under the plan, would not be allowed to vote in Israeli elections. That is the very definition of apartheid. (Though Israeli law forbids Israelis living outside Israel -- except for diplomats and military -- to vote in Israeli elections, Israeli colonists, known euphemistically called "settlers," -- though living legally outside Israel -- have had the right to vote.)

Netanyahu is simply brushing aside warnings that came from earlier Israeli leaders.

While many critics of Israel have pointed out that Israel was already running a de-facto apartheid system in its rule over four million Palestinians without rights, legal apartheid would come with annexation of the West Bank. Negative public reaction to that appeared to be the reason annexation had been resisted by Israel until now.

No less than two former Israeli prime ministers have said so. "As long as in this territory west of the Jordan River there is only one political entity called Israel, it is going to be either non-Jewish, or non-democratic. If this bloc of millions of Palestinians cannot vote, that will be an apartheid state," said Ehud Barak in 2010.

Three years earlier, former Israeli Prime Minister Ehud Olmert said: "If the day comes when the two-state solution collapses, and we face a South African-style struggle for equal voting rights (also for the Palestinians in the territories), then, as soon as that happens, the state of Israel is finished."

Related Topic(s): Apartheid; Israel And Palestine; Israel On The Potomac; Jerusalem; Nakba; Trump Against Democracy; Trump Cruelty; Trump Israel, Add Tags
Add to My Group(s)
Go To Commenting
The views expressed herein are the sole responsibility of the author and do not necessarily reflect those of this website or its editors.