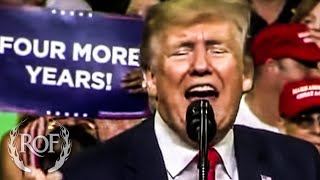 "I could stand in the middle of Fifth Avenue and shoot somebody and I wouldn't lose voters, okay?" Donald Trump said at an Iowa campaign rally in January of 2016. That remark gets quoted, mostly by liberals bemoaning the unquestioning loyalty of the president's stupid supporters, a lot.

But there's another, more interesting, facet of that meme: Trump, it's clear, can get away with just about anything -- impeachment included. He will be impeached without turning a single voter against him.

Nothing has ever been less deniable than the president's imperviousness to, well, everything. Trump's haters hate it, his fans love it, everyone accepts it. A month ago Trump's lawyers for real argued in open court that, if their client actually were to go on a shooting spree in midtown Manhattan, he couldn't be charged with a crime until he was no longer president.

Without enumerating President Trump's rhetorical offenses and deviations from cultural and political norms, how does he get away with so much? Why doesn't he lose his base of his electoral support or any of his senatorial allies?

Hitler believed that, in a confrontation, the combatant with the strongest inner will had an innate advantage over his opponent. Audacity, tenacity and the ability to keep your nerve under pressure were essential character traits, especially for an individual up against stronger adversaries. Trump never read "Mein Kampf" but he follows the Fuhrer's prescription for success. He never apologizes. He never admits fault or defeat. He lies his failures into fake successes, re-framing history into a narrative that he prefers. It's all attitude: because I am me, I can do no wrong.

But I get this.

When I began my career as an editorial cartoonist, I staked out ideological territory far to the left of my older, established colleagues, most of whom were ordinary Democrats. In the alternative weeklies, other cartoonists were as far left as me. But they weren't syndicated. I went after mainstream daily newspapers. My first two syndication clients were the Philadelphia Daily News and the Los Angeles Times.

My status as an ideological outlier reduced the number of newspapers willing to publish my work. But the editors who did take a chance on me knew what they were getting and so were able to defend me against ideological attacks. Once they saw that braver papers were publishing my cartoons, moderate publications picked them up too.

Despite being an unabashed, unrepentant leftist, I became the most reprinted cartoonist in The New York Times. Secretly, many of the "Democratic" cartoonists were as left as me. They were jealous: how had I gotten away with wearing my politics on my sleeve in such bland outlets as The Des Moines Register and The Atlanta Constitution?

First, I was willing to take some heat. I accepted that I would get fewer clients and thus less income. I insisted on drawing the work I wanted to do, watering down of my politics. If everyone rejected me, that was fine. Better not to appear in print than to do wimpy work. And in the long run, I was better off. There have been rough patches. But progressives have taken over the Democratic Party. I'm one of the few pundits the left can trust for a simple reason: unlike Bill Maher and Arianna Huffington, I have always been one of them, regardless of prevailing winds.

Second, I developed an unusual drawing style. When I started out most editorial cartoonists mimicked two icons of the 1960s and 1970s, Pat Oliphant and Jeff MacNelly. The "OliNelly" house style of American political cartooning was busy, reliant on caricature and crosshatching. Daily newspaper staffers drew single-panel cartoons structured around metaphors, labels and hoary symbols like Uncle Sam, the Democratic donkey and Republican elephant.

I did everything the opposite. I drew multiple panels, wrote straightforward scripts inspired by comic strips. My drawing style stripped down to a brutally simple abstract look in which most characters looked almost identical. No metaphors -- you didn't need to learn how to read a Ted Rall cartoon. They weren't as pretty as MacNelly's. The chairman of the Pulitzer committee, whose death I shall toast, denied me the prize because I didn't "draw like a normal editorial cartoonist." But you knew my stuff wasn't by anyone else. Branding.

Related Topic(s): Branding; Cartoonist; Donald Trump Versus The Constitution; Newspapers; Trump Against Democracy; Trump Attacks Democrats; Trump Bully In Chief, Add Tags
Add to My Group(s)
Go To Commenting
The views expressed herein are the sole responsibility of the author and do not necessarily reflect those of this website or its editors.