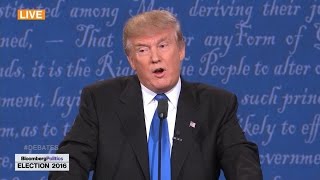 It's funny how an election can change the way a man sees the world. Before the election, Donald Trump thought that stocks were dangerously inflated. In an interview on CNBC, he said "I hope I'm wrong, but I think we're in a big, fat, juicy bubble."

That was Candidate Trump. President Trump sees things differently. Here's what he tweeted on Tuesday:

"Since November 8th, Election Day, the Stock Market has posted $3.2 trillion in GAINS and consumer confidence is at a 15 year high."

See the difference? So when Trump was running for office, stocks were headed for another thundering crash. But now that he's president, Happy Days Are Here Again. The question is: Which Trump do we believe? Are stocks in a bubble or not?

Stocks aren't just in a bubble, they've completely detached from reality. According to the Wall Street Journal:

"The stock market's valuation is now in the 96th percentile of all observations in the past 135 years based on a cyclically adjusted measure used by Yale professor Robert Shiller...

"...it is no surprise that most of the S and P 500's 17.1% annualized price gain since the bottom in 2009 has come as a result of valuation rather than real earnings growth or inflation. Justin Sibears of money manager Newfound Research calculated that a larger portion of the current bull market's returns have come from valuation gains than any since the 1920s bubble. Perhaps not coincidentally, the Shiller price-to-earnings ratio is at the same level as observed in July 1929." ("Economy Up, Stocks Down? Don't Be Surprised," Wall Street Journal)

Read that clip over again. So not only are stocks inflated to 1929-levels but, also, the bulk of corporate earnings is currently coming from higher stock prices. In other words, fatcat CEOs are making more dough jacking their share prices via stock buybacks than they are by selling widgets or providing services. It's crazy. What was it that John Maynard Keynes said? He said:

"Speculators may do no harm as bubbles on a steady stream of enterprise. But the position is serious when enterprise becomes the bubble on a whirlpool of speculation."

Was Keynes right? Is the Trump Rally a sign that the markets have become a "whirlpool of speculation"?

The Yale economist who predicted the dot.com bust and the 2008 financial crisis seems to think so. Check out this excerpt from an article on CNBC:

"'The cyclically adjusted P/E (CAPE), a valuation measure created by economist Robert Shiller now stands over 27 and has been exceeded only in the 1929 mania, the 2000 tech mania and the 2007 housing and stock bubble,' Alan Newman wrote in his Stock Market Crosscurrents letter at the end of November.

"Newman said even if the market's earnings increase by 10 percent under Trump's policies 'we're still dealing with the same picture, overvaluation on a very grand scale.'" ("Market indicator hits extreme levels last seen before plunges in 1929, 2000 and 2008," CNBC)

It's worth noting that the article was written in early December. Since then, stocks on the Dow have added another 2,000 points, which means that we have definitely entered the Danger Zone.

Related Topic(s): Bubbles; Donald Trump Lies; Economy; Flip-flops; Markets; Trump Idiot-in-chief, Add Tags
Add to My Group(s)
Go To Commenting
The views expressed herein are the sole responsibility of the author and do not necessarily reflect those of this website or its editors.